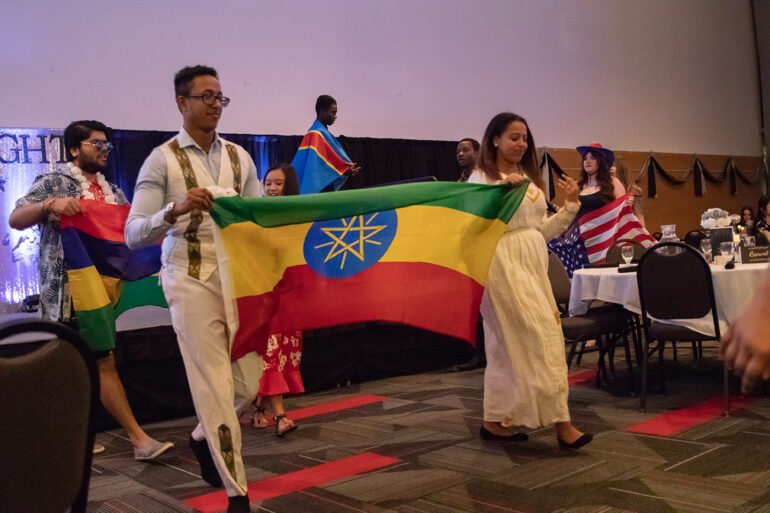 Diversity
Students and community members are encouraged to share their cultures by representing their countries flag and performing during the International Night Gala. File Photo | The Volante

The USD International Club will be hosting their International Night Gala Nov. 21 in the Muenster University Center Ballroom from 5-8 p.m.

“We start off with a flag parade,” Konechne said. “So basically, everyone has their flags that want to be in the parade, and they go up on stage and showcase their country.”

Computer science graduate student Muntasir Mamun is the president of the International Club. Mamun said the gala event will include performances where people can sing and dance on stage.

Mamun and Konechne said there will be a variety of different people embracing their cultures on stage, including African, South Asian and Bangladeshi performances.

“The goal is to get people from all over the world to come to the event and give them an opportunity to talk about their culture and showcase what they want to showcase,” Konechne said. “They can do that in the best way by being in the flag parade and doing the performances to showcase their countries.”

Mamun said the International Night Gala will also have food options from different cultures. There will be halal Muslim food, main dishes like brown sugar roasted pork loin and chicken curry and desserts like tres leches cake, along with a variety of other cultural dishes.

“It’s really important for us to get the opportunity to share cultures from all over the world and educate people that go to USD about what there is outside of South Dakota and the significance of sharing cultures,” Konechne said. “It gives people the opportunity to be proud of where they’re from and the country they’re representing.”