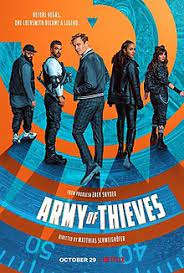 If you watched Zack Snyder’s zombie movie back in May titled “Army of the Dead” and couldn’t wait for more, well, Netflix delivered for once and quickly released a prequel following the standout character, Ludwig Dieter, in his own film, “Army of Thieves.”

To expand this new zombie universe, we go back to see the start of Ludwig Dieter’s criminal career where he was recruited to unlock three legendary safes. Cracking those locks would then propel him into America for the “Army of the Dead” movie.

One of the most interesting aspects about this film is that it is directed by its lead, Matthias Schweighöfer, who plays Dieter. He is electric on screen and really embodies his character, which is fitting considering he was the inspiration for and creator of the character.

He drives the film from his outside perspective on crime and his funny screams that jump from scene to scene. Schweighöfer was able to stand out again in this film and become even more memorable, leaving myself and other fans hoping for a chance of survival with his character.

Nathalie Emmanuel, whose most notable performance is “Game of Thrones,” stars as the Ludwig’s love interest, Gwendoline. Her character really balances out Ludwig’s quirky innocence and is also able to stand out on her own to where she is more than as a connecting thought to the male lead.

Heist movies have become mundane and overdone to me, but throw in zombies and I’ll give it a chance. Surprisingly, zombies were only referenced in this film, and this story gave more insight and backstory to the new world of heists and zombie apocalypses.

Ludwig is a breath of fresh air to crime-focused films, and so are the clever twists on popular tropes in these types of stories. I usually have a hard time rewatching heist movies as they are so money- and “pot of gold at the end of the rainbow”-focused. This film really focuses on its characters and shows real character development.

I would only criticize this film’s lack of fleshed out side characters. To nit-pick, it did follow the formula of creating stereotypical characters for a movie, giving side characters no more than two emotions and little more to do than drive the plot forward. All the side characters are selfish, giving them a one-element feel.

You are able to see some of Snyder’s influences in this film through some action shots and maybe even direction of some characters, but knowing it was Schweighöfer who directed it adds a whole new element to the film.

Schweighöfer brings a foreign experience to film that is largely intended for American audiences. The film showcased different languages from Europe, as they are essential to the story, and audiences can deal with the captions. He was able to portray different areas of Europe without having any American-influenced stereotypical versions of French or German characters.

The best part of all this is that it is a fun film. An aspect of the film was that cracking these safes weren’t just heists, it is all a quest and an adventure, the fun of being able to sneak in and open a safe with a trillion combinations. You can just feel that this was a fun film to make.

If Snyder’s vision of this new zombie universe includes numerous prequels for the main characters from “Army of the Dead” that felt as electric as this, I would grab a ticket for each one.