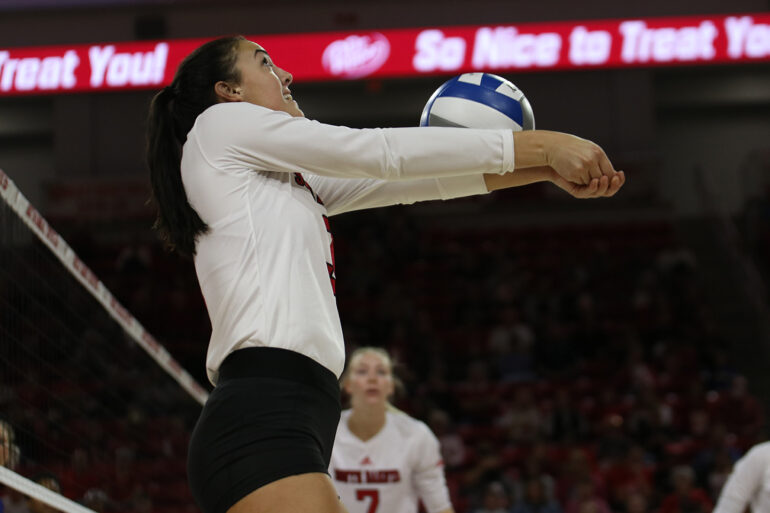 During their Thursday match-up against SDSU, the rivalry game lasted five sets. This was the first time since 2012 that the two schools went five sets against one another. It was also the first time in 11 years that the Jackrabbits had competed in the Summit League Tournament.

Junior outside hitter Elizabeth Juhnke led the team with 27 points, 23 kills and 19 digs, and had her 16th double-double of the season. Madison Harms, a junior middle blocker, had 17 points and 15 kills on the day.

The top scorers for SDSU were senior outside hitter Crystal Burk and Chloe Stitt, who had 22 points and 18 points, respectively.

After winning the match against SDSU, the Coyotes moved on in the bracket to compete against Omaha, who had defeated Oral Roberts in the previous round.

USD swept Omaha in three sets with set scores of 23-25, 28-30 and 16-25. Set two ended after a challenge by head coach Leanne Williamson ended in USD’s favor. In set three the Coyotes went on two 0-5 runs, making it hard for the Mavericks to keep up.

Juhnke again led the team in points with 25, followed by fifth-year senior outside hitter Sami Slaughter who amounted to 16 points. Juhnke also had 24 kills that equaled a school record for a three-set match and was the most kills scored in a three-set match inside the Sanford Coyote Sports Center.

Senior right side hitter Sadie Limback led the Mavericks with 14.5 points, seven digs and 13 kills. She was followed by sophomore outside Marriah Buss and freshman outside hitter Shayla McCormick, who were tied with 11.5 points.

After their win against Omaha, USD saw many of their players recognized for their success on the court. Juhnke was again named the tournament MVP for the second straight season and was joined by Slaughter and senior setter Madison Jurgens as players of the nine-member all-tournament team.

USD will now travel to Minneapolis where they will compete in the first round of the NCAA volleyball tournament against No. 12 Minnesota at 7 p.m. on Friday in the Maturi Pavillion following a match-up between Stanford and Iowa State.

Apr 25th, 202255
Before sophomore Sara Reifenrath was a Summit League champion, she was a volleyball and track...
Sports

Apr 25th, 202229
Sophomore health sciences major Stella Fairbanks had a productive diving season after she was named the...
Softball

Apr 25th, 202210
The Coyote softball team got their conference season started over the weekend, taking two of three games...
May 10th 12:47 PM
Campus