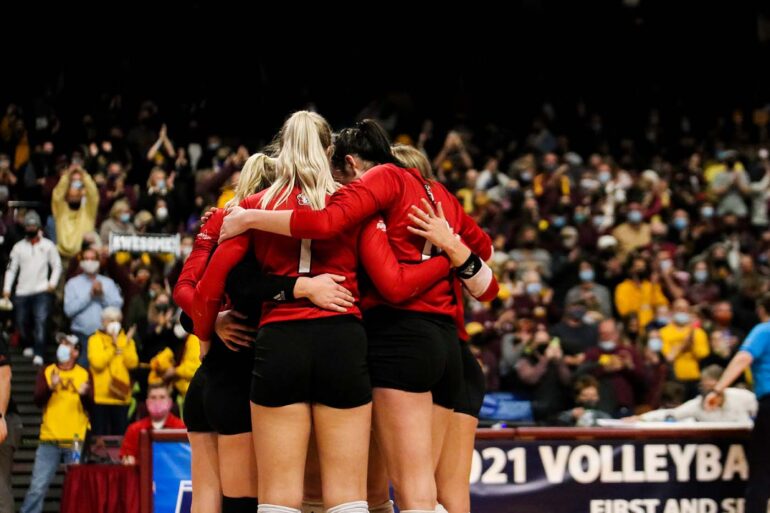 While the cold of winter settled upon the city of Minneapolis, the Coyote women’s volleyball team was warming up to take on the No. 11 ranked Minnesota Golden Gophers in the first round of the NCAA tournament.

On Dec. 3, a crowd of 4,280 fans piled into the Maturi Pavilion to watch the match-up between South Dakota and Minnesota.

To begin the first set, Minnesota went on an 8-1 run that helped them maintain the lead throughout the entire set. Going into the second set the Coyotes fought back tying the score four times with one lead change, yet they were unable to catch the Golden Gophers.

Junior outside hitter, Elizabeth Juhnke led the Coyotes in scoring with 12.5 points, ten digs and two assists, which helped her record her 17th double-double of the season. Juhnke was followed by senior middle blocker Maddie Wiedenfeld who ended the night with ten points.

The Minnesota team was led in scoring by redshirt senior outside hitter Stephanie Sameday who amounted 18 points, two assists and eight digs. Sameday was named the Big Ten Player of the Year for the 2020-2021 season.

Coyote seniors, Wiedenfeld, Sami Slaughter, Madison Jurgens, Claire Gerdes and Brooklyn Bollweg saw three NCAA tournament appearances for the South Dakota team during their four years as a Coyote. These five seniors were also a part of the best season the volleyball team has seen in school history going 16-0 in the Summit League regular season.

After their win against the Coyotes, the Golden Gophers swept the No. 18 ranked Stanford in Minneapolis on Dec. 4, sending them into the third round of the tournament. Following their win over Stanford, the Golden Gophers traveled to Madison, Wis. where they beat No. 5 Baylor 3-2 on Dec. 9. Minnesota’s next match-up will be against No. 4 Wisconsin on Dec. 11.