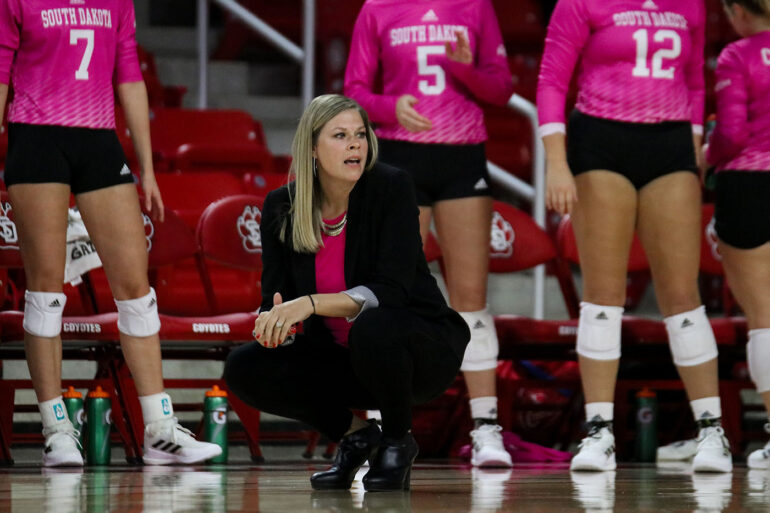 Following the volleyball team’s 2021 NCAA tournament appearance, Coyote athletic director David Herbster stated that USD will be extending volleyball head coach Leanne Williamson’s contract. The extension will last through the fall of 2026. This decision was announced Friday morning via the athletic department.

Williamson has been the head coach of the Coyote volleyball team for eight seasons. Throughout that time she has compiled a winning record of 163-76, along with leading her team to two Summit League regular season titles and three Summit League tournament titles. She is also the second coach in program history to reach 100 career wins.

“I would like to thank David Herbster and President Gestring for their continued trust in me, this staff and this program. It is amazing to work with people who share my vision of this program and continued success it will have,” Williamson said in a press conference.

During her five assistant coaching seasons, Williamson saw the program make a transition from from D-2 to D-1. Williamson has also lead the Coyotes to a winning record inside the conference of 99-28 and 55-11 at home in the Sanford Coyote Sports Center.

“I would also like to thank all of the alumni and fans of Coyote volleyball who have laid the foundation for this program. Coyote volleyball is where it is because every athlete who has stepped on the court representing USD and every fan who cheers us on from near and far. This program has accomplished a lot, and I am confident that the success will continue for years to come,” Williamson said in a press conference.

With this extension from USD athletics, Williamson will continue her career with college volleyball on the court next season.