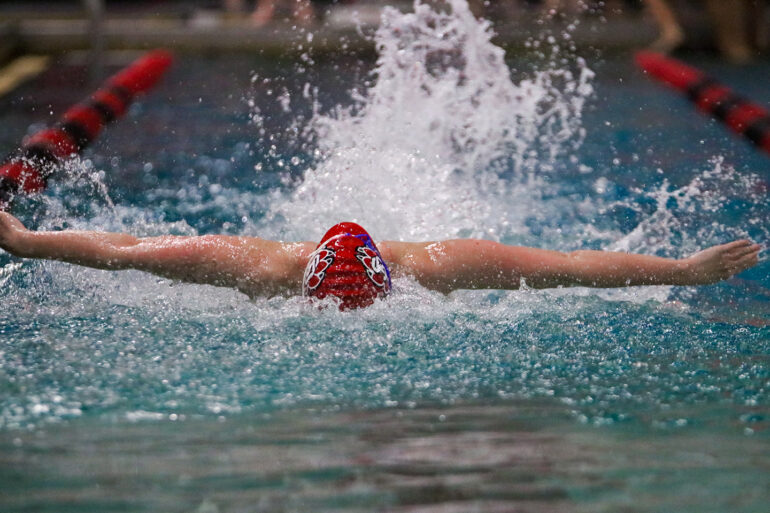 Freshman Adam Fisher, sophomore Parker Sonnabend and juniors Aidan Gantenbein and Zachary Kopp started the dual with a 1:43.64 in the 200 medley. This time was a new pool record for the DakotaDome Pool.

Fisher and Kopp also joined junior Mack Sathre and senior Charlie Bean to compete in the 200 free relay. They set a time of 1:33.62 which was another pool record.

Bean and Kopp both set new school and pool records during their individual swims. Bean did so with his time of 51:46 in the 100 free. He was also one of three Coyotes to have multiple individual wins. For Kopp, he swam in the 50 free where he posted a 23:23 time which was .01 seconds better than his previous time.

The last swimmer on the men’s side to set a new record was sophomore Keegan Henning. He swam in the 800 free where he set a new school record with a time of 8:40.24. Henning also picked up a comeback victory in the 400 free with a time of 4:13.22.

For the women’s side, Kahn led the way for the Coyotes, winning four events with three of them being a result of individual swims.

Kahn was not the only swimmer to have success on Saturday as freshman Mairead Powers broke a school record with a time of 2:18.90 in the 200 backstroke. She also won in the 400 free with a time of 4:40.32.

This meet was the final Summit League duals of the season. The Coyote men finished with a dual record of 7-4. As for the women, they finished with a record of 14-4 which is a new single season high under head coach Jason Mahowald.

The Coyotes will compete next in the Coyote Invite. The event will be held in Sioux Falls, SD inside of the Midco Aquatic Center on Jan. 28-29.