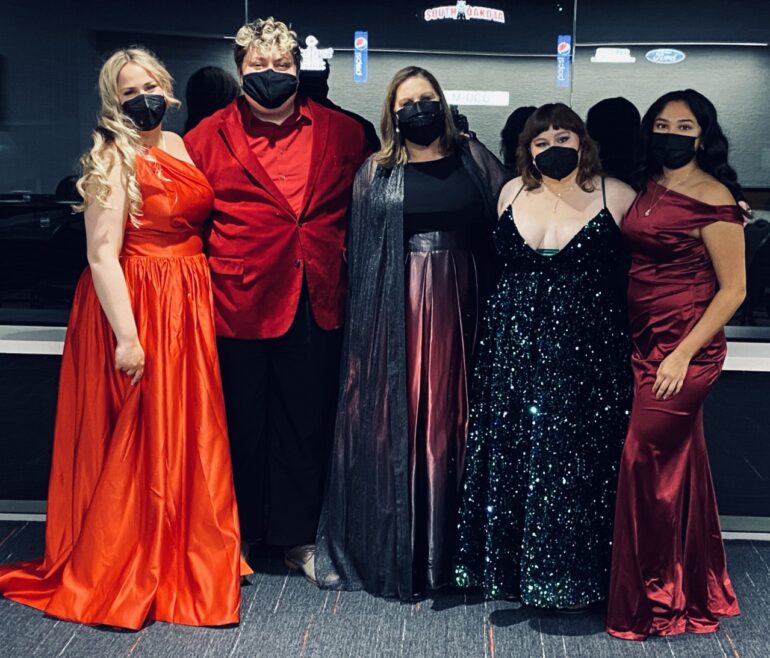 The USD Opera program hosted its annual “Death by Chocolate & Aria” gala last Saturday, albeit with a twist: this event, subtitled “Divas at the Dome,” saw four students perform for a crowd at the newly-renovated DakotaDome Club.

Gesteland, the artistic director of the gala, said the gala offers a way to showcase the opera students’ efforts and provide a kind of event that isn’t always available in a town like Vermillion, where guests can get dressed up and enjoy wine and desserts while also listening to opera highlights.

The main title of the event, “Death by Chocolate and Aria,” comes from an activity in which new performers showcase their singing skills, Gesteland said.

“On the first day of opera young artist programs, the singers are often called up on stage one by one to sing their best aria, and that activity is called ‘Death by Aria.’  Since the singers (perform) arias while the guests enjoy chocolate and other goodies, the event title takes on sort of a double-meaning,” Gesteland said in an email interview with The Volante.

In addition to being the Opera program’s main fundraising event, Gesteland said the gala also offers students the chance to sing for an audience in a more intimate setting, as they usually perform on big stages.

“A very high level of performance is expected, and they always work hard to rise to the occasion. This experience also helps our singers to learn how to engage with the public as they talk and interact with our guests throughout the evening,” Gesteland said.

To prepare for the gala, performers worked with Gesteland to choose pieces that would both highlight the singers’ skills and be accessible to the audience, Gesteland said.

For junior musical arts major Meierhenry, the gala was an opportunity to practice a difficult piece she had always wanted to learn: “Mein Herr Marquis,” from the Strauss operetta “Die Fledermaus,” which she said may become a signature piece.

“A lot of performers have a signature song, like the thing that they will perform if they need to perform something… on the drop of a dime. So (Gesteland) thought that this could be a piece that I could use my entire career, and for it to be a staple within my book,” Meierhenry said.

“As a music performance major, I don’t get to take many classes in the theatre side, like acting-wise, working on my skills,” Balandran said. “That’s not what I really get to work on in my everyday classes, so I really like bringing that out in the piece.”

Though the gala is one of only three of the Opera program’s yearly events, it isn’t the last. USD Opera’s next and final production is Handel’s “Alcina,” which will take place Saturday, April 30 and Sunday, May 1 in Aalfs Auditorium.