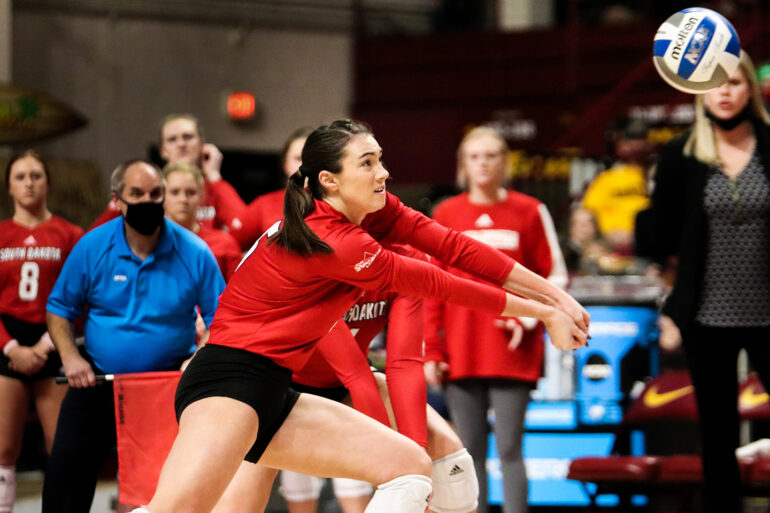 The South Dakota Coyotes had three junior volleyball players make the Academic All-Summit League. Elizabeth Juhnke, Aimee Adams and Madison Harms were named for their academic success off of the playing court.

“I think it’s just an award that shows kind of the dedication that student athletes do give to being a student and putting academics first,” Juhnke said. “I think at times it can be really challenging to balance both athletics and being a full-time student.”

Adams, a nursing major, said she works hard on and off the court, putting a lot of effort into the classroom to earn a 4.0 GPA. Adams said it means a lot to her to be recognized for her work on the court, but also in the classroom.

“It definitely means a lot to me to know that they see how hard we work inside the classroom because obviously when you play a sport somewhere at a college like me, mostly you’re seen at a performance basis, so it makes you feel really good to be noticed as someone who works hard all around and is also here for a career and not just sport,” Adams said.

Medical biology major Harms said the award is different because as athletes they are often recognized for their physical skills and specifically for their volleyball skills.

“It’s different in a good way because it shows that we are student athletes, we do both and it’s nice to be able to get recognized for being a student because there’s so much other stuff we get for being an athlete,” Harms said.

Between balancing her school schedule and practice schedule, Harms said getting a tutor in the fall was helpful for her to keep her grades up and that getting help isn’t a bad thing.

“There’s a lot of professors that are understanding and there’s so many people in the athletic and academic community that are willing to help and are willing to do a little extra help because it’s understandable that a lot of your time is going to the sport, so you might need a little more help with school,” Harms said.

All three players said that staying organized is the main reason they were are able to stay on top of their schedules. Adams said one of her favorite things to do every Sunday is write down everything that is due and to include time for self-care.

“You have to give yourself some grace and take time for you too because otherwise your mental health will go downhill. I think self-care and just planning that into your schedule is really important,” Adams said.

Juhnke, Harms, and Adams will look to continue their academic success and their success on the volleyball court next season as all of them will be returning for their senior seasons.