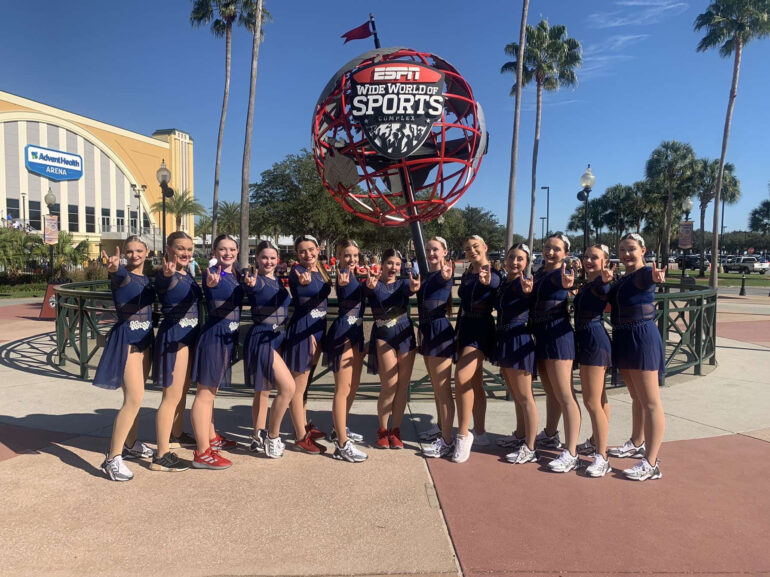 This trip to the Universal Dance Association (UDA) College Dance Team National Championships was the first time in program history that the USD dance team has competed.

In past seasons, the USD dance program hasn’t had enough members to compete at the Nationals level.

“In recent years, we haven’t had a large enough team,” dance team member Whitney Lester said. “When the head of Spirit Teams, Brooke Poppe, initially came to USD we only had four people. For the past few years, and for years to come, we’re really focusing on building the team, and our next logical step for that was going to Nationals.”

UDA Nationals was held Jan. 14-16 at the Walt Disney World Resort in Orlando. While the competition only lasted three days, the preparation USD underwent took months.

“Prep is definitely intense,” Lester said. “We initially get our choreography in September and focus on our dance once or twice a week while also balancing games and other spirit team appearances. As we near Nationals, we practiced every day for around three hours.”

USD dance team competed at UDA Nationals with a jazz routine to Beyonce’s “Runnin’.” The jazz category focuses a lot on technique as well as appealing to the audience’s emotions. For the dancers, each one found their own meaning through the routine.

“The message was a little different for every dancer, but the general message was the feeling of overcoming hard times or a struggle and how you would get through it,” dance team member Kendra Jennings said.

The dance team received a score of 15, but both Lester and Jennings agree that this trip to Nationals was about more than just the score, it’s about making a name for themselves and the program.

“It’s so important that we perform at large competitions like this to help put USD on the map,” Lester said.

Throughout their time training for their first Nationals appearance, the dance team underwent a change in leadership. The team received a new head coach halfway through the season. Emily Chiarello took over as the dance head coach after Poppe began her new role as director of Sorority/Fraternity life and spirit teams.

“(Chiarello) just jumped into the head coach position and she has done a wonderful job so far,” Jennings said. “The way (Chiarello) cares about her team and how she lets everyone have a voice is amazing, and we couldn’t have asked for anyone better for that position.”

Now that the team has returned from Nationals, they have begun work on a few new routines that they will showcase at upcoming basketball games.