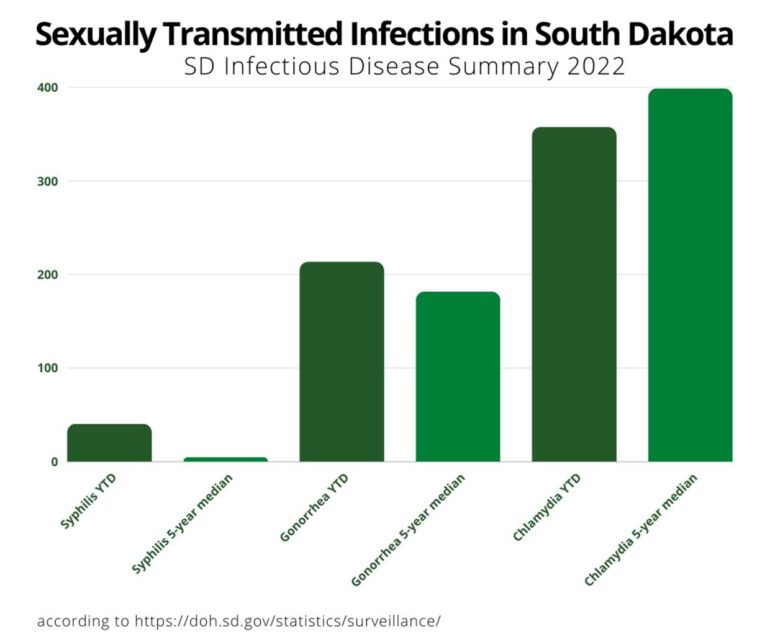 South Dakota’s Department of Health released the monthly infectious disease summary for 2022. Syphilis, a sexually transmitted infection (STI), increased 900 percent in South Dakota. The five year median of cases in the state is only four cases per year, however this year there have been 40 cases reported. Pennington, Minnehaha and Todd counties have seen the most cases, with 11, nine and eight cases, respectively. Clay county does not have any reported cases.

Dr. Jennifer Tinguely is the chief medical officer of Sioux Falls and a graduate of USD Sanford School of Medicine. Tinguely said syphilis is a bacterial infection, spread through sexual contact, that comes on in three different stages, with latent periods after stage one and two. Ideally, the infection is diagnosed in stage one and treatment can be administered before the infection progresses.

“In stage one, syphilis is usually just like a sore that somebody would see in the genital area and that comes in, then it goes away. And so, our hope is always that people will come to their medical provider with that concern because, obviously, we want to stop syphilis from spreading further from turning into stage two or stage three,” Tinguely said.

Tinguely said stage two is characterized by a rash that can appear throughout the body, but it will go away before the infection reaches the third and deadly stage.

“If you don’t treat it, that’s when we get into tertiary, or the third stage of syphilis, and that is the one that’s really dangerous and can cause brain damage and death,” Tinguely said.

This rise in syphilis and other STIs is part of a national trend, Tinguely said. She said more education is one of the ways to help stop the spread of STIs

“Certainly with other STIs like gonorrhea and chlamydia, there has been a nationwide trend as well, just seeing this increase across the board of all STIs,” Tinguely said. “…Raising concern is the right thing to do and we definitely need to be doing some education, I think.”

As a health care worker, Tinguely finds herself surprised when her patients do not seem as concerned with contracting syphilis as she thinks they should be.

“I can definitely say it seems that behaviors have changed and the thing that’s catching me most off guard with my patients, that I’m finding are positive for syphilis, is they don’t seem to understand how big a deal it is. Because to me, syphilis is like, holy smokes, that’s a rare infection. It can kill you and I just don’t think people understand that. It can be incredibly dangerous to have it and not treat it,” Tinguely said.

Tinguely said one reason STIs including syphilis, gonorrhea and chlamydia could be rising is the increased sexual activity.

“People are much just more open to having multiple sex partners,” Tinguely said. “One of the things we’re seeing with the rise of syphilis is just the anonymous sex partners and so that is concerning, you know, not really knowing who you’re with or who they have been with and when you have multiple sex partners, that’s where the risk increases.”

Tinguely said the best ways to prevent the spread of an infection, besides abstinence, are practicing safe sex and getting tested regularly.

“I tell my patients; safest way is to just not have sex. So, you don’t have sex, you’re not going to get an STI,” Tinguely said. “But that is clearly not reality and that’s fine, but then I think we have to just be honest that, okay, people are having sex and they are having sex with multiple partners. So give them the tools to be safe, which condoms work really, really well.”

In an email interview with The Volante, Rachel E. Olson, the director of clinic operations at Sanford Health, said testing and treatment for syphilis is available at the local Vermillion Clinic. Under student health, the syphilis test is $23 and testing for chlamydia and gonorrhea are both $25.