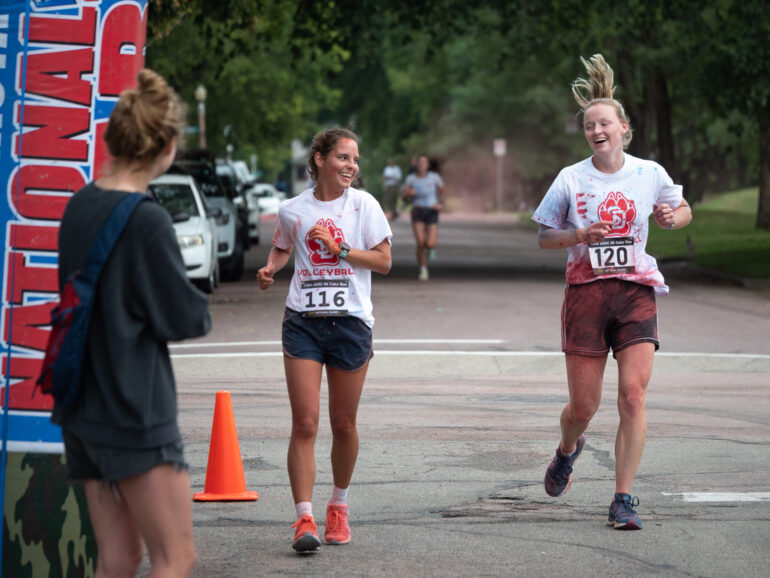 Around Town
Tom Pemrick | The Volante

Red, white and blue filled the streets of downtown Vermillion Saturday morning in remembrance of 9/11. The South Dakota Army National Guard and the 730th Area Support Medical Company hosted the 9/11 Memorial 5K Color Run and Walk for the second year in a row. The event welcomed all ages to honor the memory of  Sept. 11, 2001.

“It’s important to put on the event for the community relationships and to bring remembrance from the 9/11 event. It’s great to see more people coming out to participate,” Harvey said.

Mayor of Vermillion Jon Cole said he vividly remembers the day after the attack when the country came together to support one another.

“I remember seeing our flag everywhere and seeing people shaking hands,” Cole said. “That’s one thing I want to remind us all here: that we stay unified and remember those lost, help our neighbors out and continue to go out and do small things and remember who we are as a country.”

Participants began the race on Court Street, just outside of Old Lumber Company. Volunteers threw red and blue chalk at racers from checkpoints throughout the 5,000 meter run. Upon finishing by Main Street, participants could partake in various activities, including a petting zoo, food vendors and a car show.

USD’s Alternative Week of Off-Campus Learning (AWOL) program volunteered at the event to help throw chalk during the race. Chris Peterson, an undergraduate student majoring in Kinesiology,, said he values the opportunity to offer support toward an important day of remembrance.

“It’s a pretty neat opportunity to help grow a community and bring everyone together. I’m happy that I get to be a part of it this year and it’s important to honor those who lost their lives on this day,” Peterson said.

“I hope our community can appreciate and support the relationships that we could all build together in making this a memorable event for everything that happened on 9/11,” Harvey said.