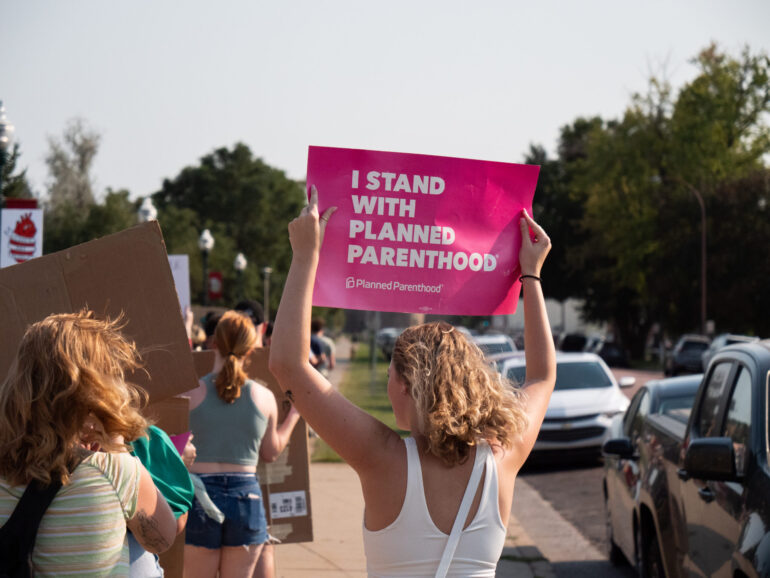 Chants and signs were throughout the USD campus against the overturning of Roe versus Wade Thursday, Sept. 8. Students showed their views on abortion rights in a march which started at the Dome and made its way through campus to Alfs Auditorium.

Lexi McKee-Hemenway, junior, a student and organizer for the rally, said she wanted to show the community they are going to fight for basic human rights even  in a small town. She said she felt it was important to show solidarity on a college campus.

“We really wanted to show the community that we are here and we are a force to be reckoned with. While this is a small town, it is going to be more of a small-scale protest,” McKee-Hemenway said. “It’s a major thing that’s going on, reproductive rights have been stripped nationwide. (We just want to prove) that here in South Dakota, where it is very conservative we do care”

McKee-Hemenway, said she wanted to host the event to let the rest of the community know about her and the people who joined the rally’s thoughts on abortion rights.

“We’re doing this to let the rest of the community know that we are here, we’re willing to work with you (and) are willing to give you resources, but also to inform them on what’s happening,” McKee-Hemenway said. “These are more than likely people (people who don’t support her and the people who were at the rally’s thoughts) who are actively being oppressed against because, it’s more than abortion rights. It’s gay rights, it’s people of color’s rights, it’s privacy rights.”

Sophie Hunter, a member of Students for Reproductive Rights, said she came to the rally because she believed the government should not have a say in women’s rights.

“I think it’s a good thing to get people involved and keep people informed on where this situation is at. It’s good to get people out and excited about standing up for ourselves,” Hunter said. “I know that there’s never going to be immediate change from this, and we’ve got a small group here, but I want to at least make our voices heard and make people see that there are people fighting. We are here to fight for ourselves and our rights.”

“It would be nice to see a little bit more action taken, especially so close to election day. I think it’s important. I’m not sure if this specific rally will have any large impact but I’m hoping similar ones going on around the country, especially in South Dakota do,” Grubb said. “I do think it’s important, just in general, that this would encourage people to get out and register to vote.”