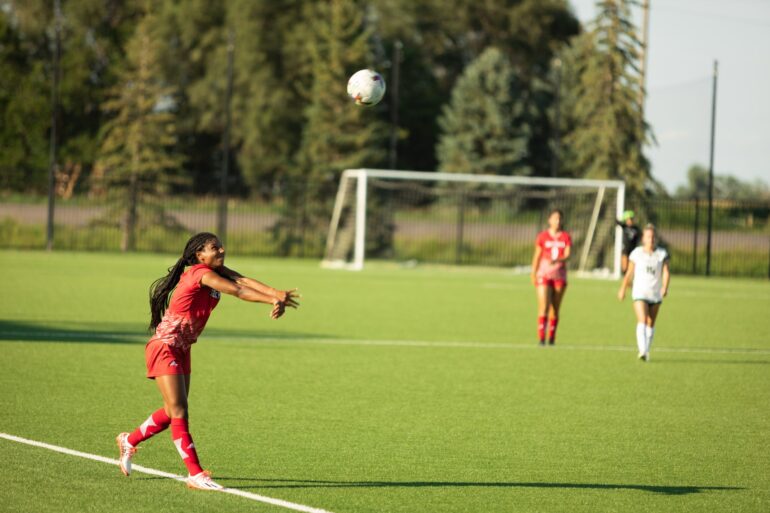 The Coyotes returned home from a trip out west to play the Drake Bulldogs at First Bank and Trust Complex on Thursday. They looked to get back in the win column after two straight losses.

USD got the scoring action started early with a goal at minute eight. The goal was a strike from outside the goalie box by senior midfielder Lexie Wood. Junior midfielder Janaina Zanin assisted Wood with the goal.

The Bulldogs struck back with a goal of their own a few minutes later as senior midfielder Rachel Panther lofted one into the middle of the goalie box where sophomore midfielder Avery Mertz headed the ball into the goal, and evened the score at one.

Just 10 minutes before halftime, Drake took the lead with a goal from sophomore midfielder Makenna Shepard after she made two Coyote defenders miss and took a right-footed shot that went through the Coyote’s defense. The Bulldogs lead the Coyotes 2-1.

South Dakota then scored the game-tying goal at minute 49. After a free kick from fifth-year senior forward Joana Zanin hit the blockers and ricocheted into the top right corner of the net.

Towards the end of the second half,  both teams were deadlocked at 2-2. Drake had a chance to score, but the shot from the Bulldogs went wide just left of the goal leaving no goal.

USD got good chances at the goal with three of their four shots being on goal but could not make one. As for the Cyclones they had six shots on goal but twenty-two shots in total.

But with both teams being unable to score the game ended in a 0-0 draw as the Coyotes ended their non-conference schedule.

The Coyotes are currently 1-5-3 heading into conference play. They get an extended break of 13 days until they play in-state rival South Dakota State in Brookings on Sept. 24 at 6 p.m.