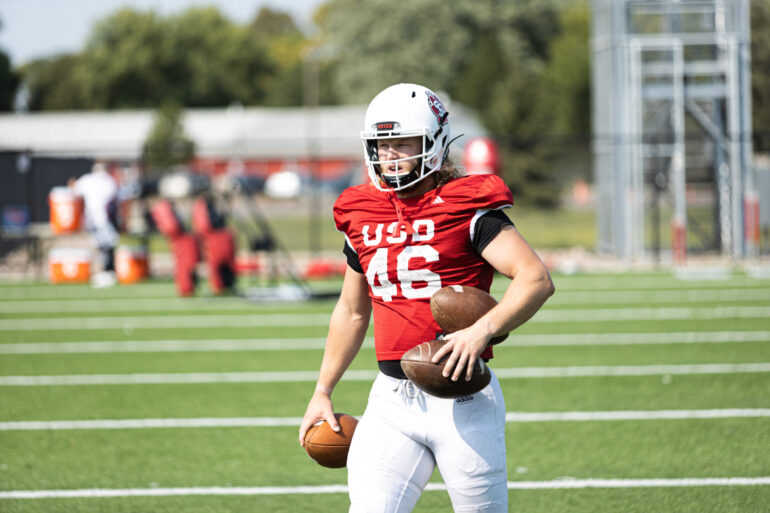 As a freshman, long snapper Dalton Godfrey never thought being a team captain was in the cards for him, but head football coach Bob Nielsen always saw something in Godfrey from day one.

“[Nielsen was] like ‘you’re being a good leader, but I think you could do a little more’ and I just kept doing those things that he asked me to do every year,” Godfrey said. “And eventually it led to me being named a team captain.”

Godfrey said his teammate mentality doesn’t begin when he steps on the field, it comes from building a welcoming atmosphere for the whole team.

“You’ve got to make relationships with those guys off the field,” Godfrey said. “You just really got to get to know them on a personal level, talk to them in the locker room and that can transfer over onto the field encouraging them.”

“I’ve been working with [Ogamba], this will be our second year together,” Godfrey said. “It’s not a ton different, these guys transferring in have a ton of experience.”

Working with different players from a year ago doesn’t change Godfrey’s approach or technique to snapping, but it changes the way he leads and mentors the special teams unit.

“If they’re struggling you obviously treat people differently,” Godfrey said. “Some guys like to be criticized, they’re going to dig in on that criticism and really work on it. There are some guys that you need to be more of a friend and help them through it if they are going through a slump.”

Godfrey’s first goal for the season is to help lead the Coyotes to some team accolades and going on a playoff run, but he’d also like to get on the CoSIDA All American team, an award that credits an athletes work not only on the field but also in the classroom.

At a young age, Godfrey’s parents instilled the importance of academics into him and now he is trying to set an example for his teammates on and off the field.

“I’ve actually pushed really hard on the academic side, harder than I did in high school, making it a priority in my college career,” Godfrey said. “I just try and drive guys on the team and show them that working hard in the classroom has a reflection on the field.”

After the season ends, Godfrey has a couple of options for what he wants to do following his collegiate career. , His first option is to play at the next level.

If that doesn’t work out, Godfrey wants to stay in the Midwest and be part of a football coaching staff or work in a front office role at the college level. If he goes down the coaching route, Godrey would like to coach a special teams unit.

Athletic administration is another job that interests Godfrey, as he likes the role David Herbster has as the Athletic Director for USD.

After six years on the football team, Godfrey said he is going to miss his teammates and his coaching staff the most after his playing days are over.

“It’s a true brotherhood here. After six years, you realize how much these guys mean to you and how much the coaching staff means to you,” Godfrey said. “Not being able to see those guys every day, talk to them every day, not make fun, poke fun at them every day. It’ll be missed, for sure.”

Godfrey and the Coyotes will play their home opener on Hall of Fame Weekend this Saturday at 1 p.m. inside the DakotaDome against the Cal Poly Mustangs.