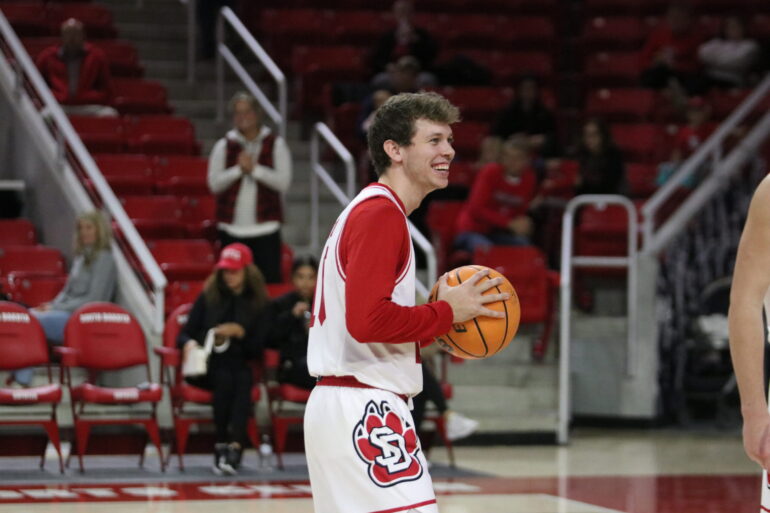 A men’s basketball player is ready to trade in his street clothes for a red and white jersey as he makes his comeback after a season away from the court.

Vermillion native A.J. Plitzuweit has been on the Coyote roster for three seasons but has only played one. During the 2019-20 season, Plitzuweit was redshirted, then in 2020-21 he started 22 games and received the Summit League Newcomer of the Year and all-Summit League First-Team honors before dislocating his knee, tearing his ACL, LCL and hamstring.

These injuries sidelined Plitzuweit last season as he was forced to take a medical redshirt year.

Now, Plitzuweit is ready to get back to the sport he loves and said he has been playing as long as he can remember.

“I am looking forward to playing on the court again and contributing to our team’s success,” Plitzuweit said in an email interview with The Volante. “I really just want to soak in this whole upcoming season and appreciate all the moments that come along with it.”

Plitzuweit said his journey back to the court has been long, but he has also learned a lot about himself throughout the process. His daily schedule included rehab, icing, biking and lifting to get himself ready to compete this season.

“I think I’ve learned how to be a more patient person,” Plitzuweit said. “As a competitor, I always want to go go go, but I’ve had to learn restraint, and how to handle the bad days, so the good days feel even better.”

As Plitzuweit enters this upcoming season he said there is one specific game he is really excited about: Wisconsin.

“I have a lot of family that will be able to attend, so it will be awesome to have the opportunity to play in front of them,” Plitzuweit said. “Some of my extended family has never been able to see me play in-person, so that will be a really cool experience.”

On top of being excited to play in front of his family against Wisconsin, Plitzuweit is also hoping to help the Coyotes secure one of their goals; to bring a Summit League Championship to USD.

“A lot of our older guys have been really close (to winning a Summit League Championship), but we have never been able to get over the hump,” Plitzuweit said. “Our goal is to continue getting better every day, so we are prepared and playing our best basketball in March.”

Not only is Plitzuweit eager to reappear before the Coyote fans, he said his team is also excited about returning to the court and hopeful that fans are ready to pack the Sanford Coyote Sports Center for their first game of the season, an exhibition match against Simpson College on Oct. 30.