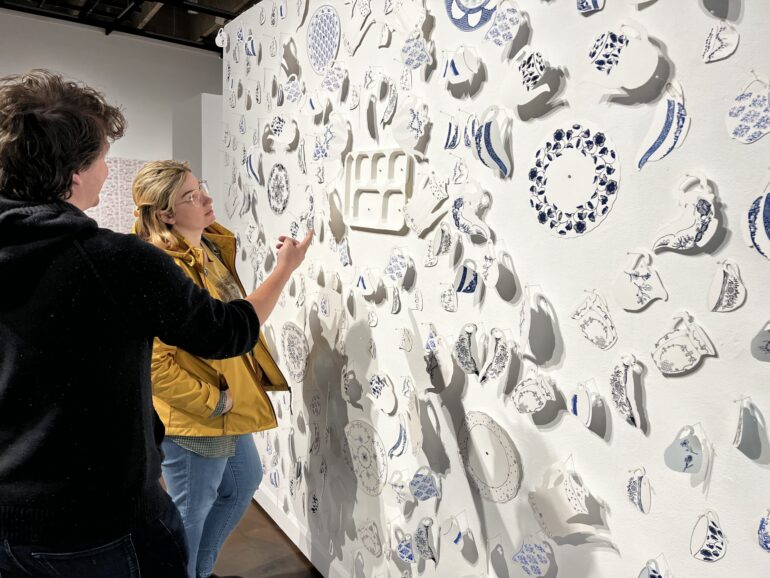 Several artists have been brought together in two related exhibitions, “Sitting Down Together” and “Amanda Boeger: Matresence,” highlighting concepts like domesticity and the changes of motherhood and family.

Seeking to bring a new perspective to USD, gallery curator Amy Fill contacted several different artists for these exhibitions. “Sitting Down Together” features work from three professors of printmaking, Melissa Haviland at Ohio University, Andy DeCaen at the University of North Texas and Janet Ballweg at Bowling Green State University. Amanda Boeger is a local artist from Sioux Falls.

Fill said “Sitting Down Together” and Boeger’s exhibition focus on experiences of being at home, connecting with others in the home and caring for a home.

“(The exhibition is) dealing with domesticity and when we think of domesticity, we think of the home and typically women’s kind of work. I mean, I think that’s changing now, a little bit,” Fill said.

Boeger’s exhibition more explicitly expresses these themes through the lens of a new mother, Fill said.

“(I was) wanting to pair the smaller gallery space with a show that communicates with (“Sitting Down Together”) and (Boeger’s) dealing with just the woman’s issue of childbirth and how that changes her life, her body, her mind, and her relationship with the world,” Fill said.

In an email interview with The Volante, Boeger said she painted models, herself and her new baby in order to show the beautiful and difficult parts of having a child.

“Matrescence is a period after giving birth in which a mother or non/binary birthing person experiences great psychological, social and physical changes. It’s essentially a period of time in which a mother or parent is born themselves. My portrait work in general focuses on the human experience and giving birth to a human is a big experience. I gave birth to my first baby in February of this year, which switched my focus,” Boeger said.

Fill first encountered Boeger through social media and was really fascinated with her art work. Boeger has since been involved with other exhibitions within the USD community. Fill said Boeger’s work is visually very interesting.

“I love (Boeger’s) painting technique and the energy and color that she uses in her figurative paintings. They really feel very playful and spontaneous. And also still dealing with issues like psychological (issues) too. But just her work talks about the human experience,” Fill said. “This current show is obviously more about her body and because it’s about her giving birth, and raising your child, but I think there’s some really nice, subtle headers, just some really great reflective moments within her paintings and the observations of kind of the mundane experiences that come along with being a human and really putting focus on some of those moments.”

The themes of these two exhibitions follow each other, which was intentional for Fill, who curates galleries in ways not only meant to interest USD’s larger community but also provide an educational benefit for fine arts students.

“I try to build shows that would be of interest to the art department… Sometimes there’ll be like national artists that are not local or have a tie to USD like this particular show,” Fill said. “I reached out to (Haviland) and asked her if she wanted to co-curate with me and if she had any artists she would want to show with that she never had before. So she picked (Ballweg) and (DeCaen) and it was kind of a coincidence that (DeCaen) was also an alumni so that was a pretty nice coincidence,” Fill said.

“Sitting Down Together” opened on Oct. 17 in the John A. Day gallery and “Amanda Boeger: Matresence” will open soon in room 110 gallery, in the Warren M. Lee Center for Fine Arts. The opening reception for both exhibits will be Nov. 4.