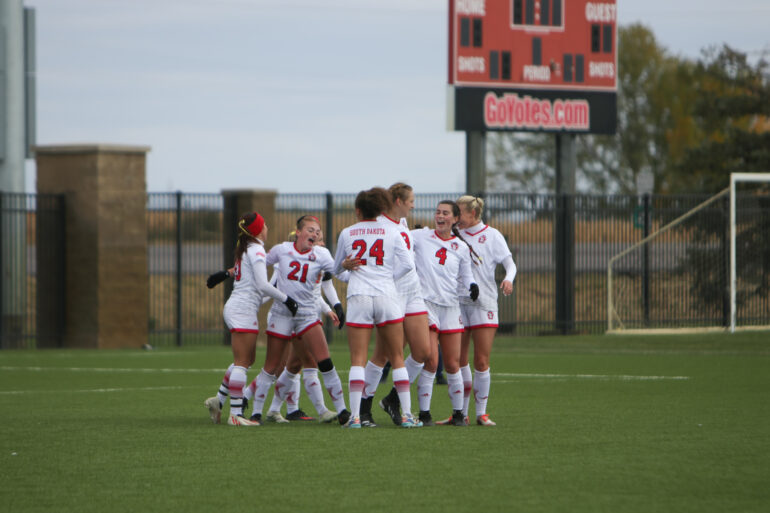 South Dakota’s soccer team headed up to North Dakota for their final two games of the 2022 regular season Oct. 21 and 23.

With the Summit League playoffs vastly approaching, the Coyotes only needed a tie or a win to secure their playoff hopes. The other teams that were hoping to get their spot were North Dakota State and North Dakota, the Coyotes’ next two opponents.

On Oct. 21, the Coyotes got off to a slow start as the Bison were able to get on the board first when senior midfielder Lavin Douglass put one into the net.

The Coyotes answered in the second half when junior midfielder Ashby Johnston tied the game up and kept their playoff hopes alive.

Two North Dakota State Bison however, made sure they were in the playoffs as junior forward Olivia Lovick scored one goal and sophomore midfielder Olivia Watson scored two. This win secured the Bison’s spot in the playoffs as the fifth seed. They will play Oral Roberts on Oct. 28.

South Dakota then went to Grand Forks in a must tie/win situation to secure the final spot of the playoffs. The Fighting Hawks were also in a must win situation.

Neither team was able to put the ball in the net in the first half.

As for the second half, the Fighting Hawks struck first in the 60th minute. Freshman defender Amelia Loeffer scored her second goal of the season.

The Coyotes had 11 total shots between the 60th minute and the end of the game, however none of their shots went into the net which ended their season. The Fighting Hawks captured the sixth seed in the tournament and will play Omaha on Oct. 28.

Scoring for the Coyotes was led by fifth year senior forward Joana Zanin as she scored five goals in her final season. Following Zanin was Johnston and senior forward Shaylee Gailus who each had four goals.

Redshirt junior goalie Caroline Lewis had three games where the opponent was unable to score on her during her first season as a full time starter. She saved 76 total shots this season.

The Coyotes will lose seven seniors after this season including Cotter, Zanin, Jordan Centineo, Teresa Fontenot, Lexie Wood, Anna Hossfield and Tiannah Moore. Michael Thomas will be heading into his sixth season as a head coach.