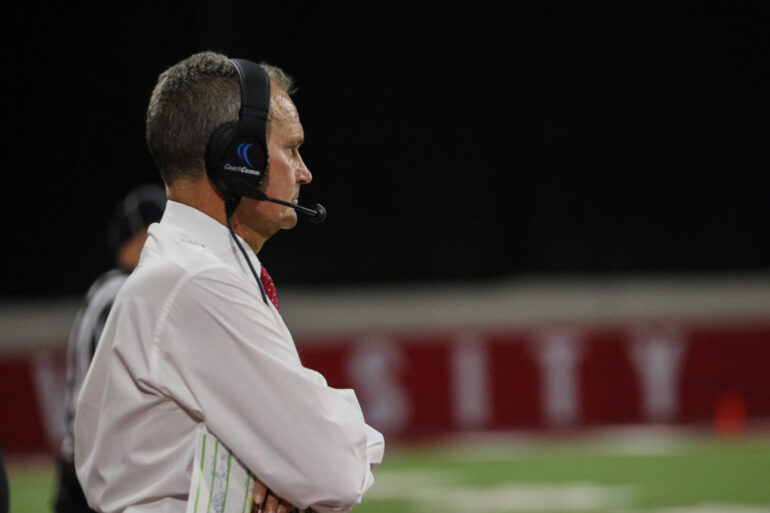 South Dakota football head coach Bob Nielson has been the topic of conversation around Vermillion lately after losing four of his first five games of the season. Begging the question: Is Nielson’s time with the Coyotes coming to a close?

Nielson was the head coach of a fellow Missouri Valley team, the Western Illinois Leathernecks (WIU), from 2013-2015 and led the Leathernecks to a (16-21) record over his three-year span. In 2015, the Leathernecks made it to the FCS playoffs with a 6-5 record, making it Nielson’s first winning record with WIU. Western Illinois went on to beat Dayton in the first round 24-7, but then fell to No. 4 Illinois State 36-19 in the second round. Nielson was named the Missouri Valley Football Conference Coach of the Year that season.

Joe Glenn, the Coyotes head coach at the time, retired following the 2015 season after four seasons with USD. This opened the door for Nielson who was coming off his best season at the D-1 level. Nielson parted ways with Western Illinois to take the South Dakota job.

One of his first orders of business was picking up Minnesota quarterback Chris Streveler from the transfer portal; and it paid off. The Coyotes went 4-7 in Nielson’s first season, but they looked more competitive than the year before with nine of the 11 games being decided by one possession. Streveler was named the Missouri Valley Football Conference Newcomer of the Year.

The Coyotes built off the momentum and went 7-4 in the regular season in 2017. This led them to their first playoff appearance at the D-1 level. USD knocked off No. 22 Nichols State in the first round, 38-31, but fell in round two to No. 5 Sam Houston State, 54-42. Streveler was the runner up for the Walter Payton Award which is given to the best offensive player in the FCS.

In 2018, with Streveler gone, the Coyotes went back to having a 4-7 season and struggled throughout the year despite only losing to Kansas State by three points in the season opener.

The Coyotes had another losing season the following year, going 5-7, but they ended the year with excitement after defeating No. 5 in-state rival SDSU in the season finale. This was the Coyotes’ first win against the Jackrabbits since 2000.

The 2020 COVID-19 shortened season saw the Coyotes go 1-3, losing their final three games before the remainder of the Coyotes’ season was canceled.

The Coyotes went 7-5 in 2021 and made it to the playoffs for the second time under Nielson. This team’s record could’ve been near perfect if some things fell their way. They almost defeated Kansas, Missouri State and Illinois State. In the game against the Red Birds, they played without quarterback Carson Camp in the second half due to an injury. The Coyotes lost in the first round of the post season 22-10 versus No. 21 Southern Illinois, the first playoff home game in the D-1 era for USD.

This season the Coyotes were handed the toughest ranked schedule in the FCS and experts predicted a 1-4 start by the team and they were right. The team is currently 2-5.

The offense had no life in the first two games but got a burst in game three versus Cal Poly with Nielson taking over the offensive play calling. The offensive production only lasted that one game as they fell flat against NDSU (17-34), SDSU (3-28) and Illinois State (10-12). However, Dakota Days saw a whole new offense which led to the Coyotes’ second win of the year.

In review, Nielson has had two winning seasons in his six with the Coyotes, two playoffs appearances and a 31-39 record at USD.

Neilson’s offense has pretty much been nonexistent this season as they are second-to-last in yards per game and have scored the least amount of touchdowns in the Missouri Valley Football Conference this season.

The Coyotes scored 12 touchdowns this year and eight of which came in their two wins on the season, resulting in only four touchdowns in the five losses combined. The offense averages 14.6 points per game which ranks last in the MVFC.

However, with all this being said, the game on Dakota Days gave a new life to the Coyote offense once a quarterback change from Camp to redshirt freshman Aidan Bouman was made. The offense was consistently moving the ball, something we haven’t seen much of this year. As the Coyotes picked up 335 offensive yards, 205 of those yards coming from the ground to win their sixth straight homecoming game.

The Dakota Days performance has cooled Nielson’s hot seat for now after defeating a top team like Southern Illinois, but the true test for Nielson will be if he can help his team build off this win.

If the team keeps up the momentum like we saw on Dakota Days, Nielson isn’t going anywhere.

With a lighter schedule next season, the playoffs may be in reach. However, the playoffs this season are a long shot. The Coyotes would need to win the rest of the season to potentially get a playoff bid, which will be no easy task with their next game being on the road against Youngstown State, a place the team has never won at.

Nielson’s contract is through 2024 so a firing after the 2023 season would result in a minimal buyout for USD.

While Nielson may find himself safe from the chopping block for now due to the victory over the Salukis on D-Days, what will his fate look like if the team can’t keep up their momentum the rest of the season? It’s hard to tell now, all we know is that the world of college football is ever-changing. Just ask Scott Frost or Paul Chryst.