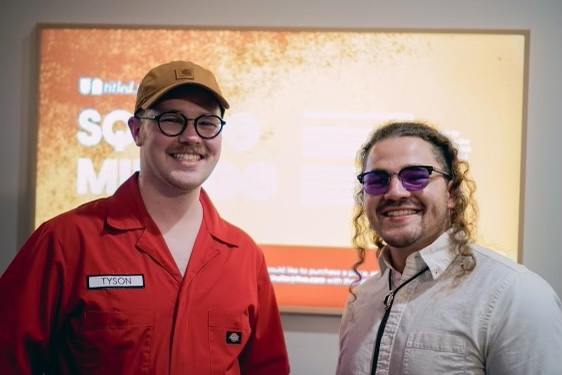 Two recent graduates of USD have come together to create a platform called Untitled .10 for upcoming artists to share their work.

Tyson Schultz and Levi Sternburg former USD art students, who specialized in graphic design and art, respectively. The two of them have come together as partners to create an organization for students in the Sioux Falls area, and around the state of South Dakota.

They said their goal is to create an opportunity for young and emerging artists to show their work in art shows outside normal means. Untitled .10 is a social media platform for artists to get their name out there and get opportunities to be showcased in a pop-up show run by Schultz and Sternburg.

Using resources around them, places and people, they put on pop-up shows throughout the fall, winter and spring for people to come enjoy. Most of these pop-up shows are in the Sioux Falls area and have artists from around the nation present their work.

As artists themselves, Schultz and Sternburg understand what it is like to be a young new artist and want to help alleviate some of the struggle that comes with starting off in the industry.

“Being an artist is an uphill battle, we are trying to smooth that hill for artists in South Dakota” Sternburg says.

They both said that making art for a living is a risky commitment, but they hope to make it easier for those up-and-coming artists.

Their next big show is on Nov. 26 at the Great Plains Zoo in Sioux Falls. This show is for students to have the opportunity to share their art with the community.

Both Schultz and Sternburg said they are incredibly excited to show art in a space like a zoo, it is different from anything they have done before.

They will have two headlining artists, along with engaging other undergraduate student artists, in this gallery.

As part of the art show, the zoo hopes to raise awareness for conservation efforts for animals. They hope that there will be a lot of support for not only the artists but the zoo as well.

Based out of Sioux Falls, Schultz and Sternburg want to expand to the entire state, specifically artists from USD. They said they feel like there is a “giant wall” between Vermillion and Sioux Falls that they hope to tear down.

They want people, specifically students, to feel comfortable coming to shows and branching out from galleries in Vermillion.

Their ultimate goal with this program is to get a space of their own where they can show art, and help upcoming artists become known in the real world.

They do not take any commission for any art sold at their pop-up shows, it is mainly for the public to enjoy art and for artists to share their work.