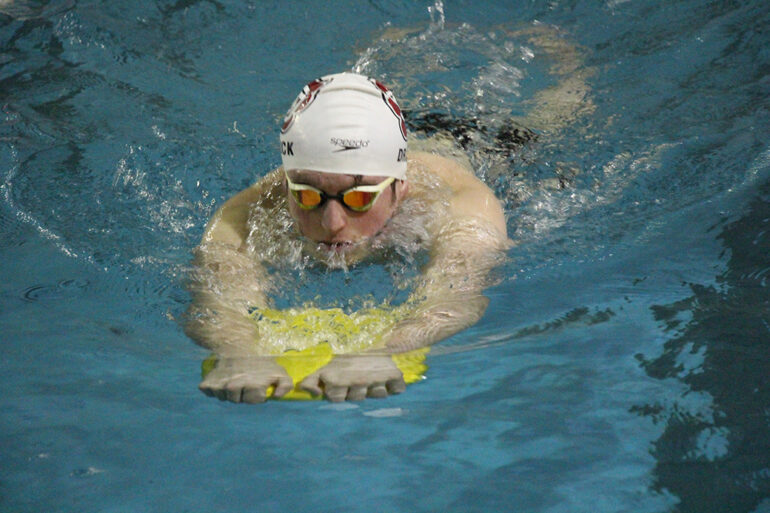 Sports
Using his kick board, first-year Tommy Drazick practices Dec. 3 with his fellow Coyotes before they swim their next swim meet. Sydney Mook / The Volante

“We don’t rest for anything, we swim fast,” head swimming coach Jason Mahowald told his swimmers during practice.

And swim fast they did.

The men’s swimming team brought in a score of 909.5 points over the weekend to finish in second place at the Rochester Collegiate Invitational, while the women’s team took first place for the second year in a row with a score of 1,831 points.

Mahowald said last week the defining factor that would separate the Rochester meet from previous meets was the amount of rest time the team would have before competing. In total, swimmers rested for nine days.

“This is kind of the meet where we like to try to put up some times kind of halfway through the air,” he said. “If you look back at the last few meets, we were pretty beaten up. We were training pretty hard at those times.”

One factor helping the teams’ times was the pool in the Rochester Recreation Center. The depth of the pool was 17 feet, three feet deeper than what the USD swimmers are used to. If a pool is deeper, the water is faster.

“When you do a flip turn the water just keeps on going and it doesn’t like get clogged up at the end so you’re going to go faster and it’s just going to help your times drop more actually,” said junior captain Jake Knowles on Tuesday.

A major difference that may have played a role in how both teams scored was the absence of the USD dive teams. While the swim teams were in Rochester, the dive teams were about 90 miles away at the Jean K. Freeman Invitational in Minneapolis. Seven USD divers competed and junior Greysen Hertting recorded top-five finishes on each board.

Mahowald said the reason the teams were split up this weekend was to give some of the teams’ elite divers a chance to compete in an open-air environment similar to the one they’ll be competing in when they swim at the conference championships.

The absence of the divers was felt, Knowles said.

“Our divers, they’re kind of a rooty-tooty bunch. They get you going and they pump you up,” he said.

Mahowald said one of the contributing factors to the teams’ successes this year has been the leadership shown by older swimmers.

“I think we’ve got really good leadership that I think has allowed the freshmen to feel like they’re able to step up,” he said. “Our juniors and seniors have done a great job of really bringing the freshmen up and letting them know that it’s okay to step up and perform and swim fast.”

Theresa Godlewski, a first-year swimmer, said the dynamic of the team is good and helpful to the younger swimmers.

“The dynamic is really good. We all get really get along with the other freshmen and the upperclassmen,” she said.

The swimming and diving teams’ next meet is the Air Force and Seattle Triangular in Colorado Springs, Colo., from Jan. 15-16.