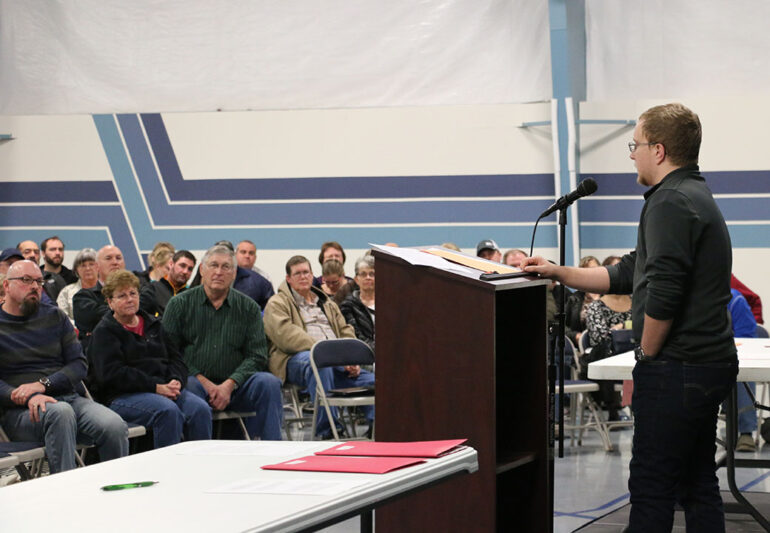 National
Senior political science and history major Cole Bockelmann speaks with Iowa caucus goers about why Ohio Gov. John Kasich would be the best candidate for the Republican Party on Monday evening in Sergeant Bluff, Iowa. Malachi Petersen / The Volante

“Is there anyone to speak for Governor John Kasich?” asked the man in charge of the Sergeant Bluff, Iowa, Republican Caucus for the second time Monday evening. One hand shot up. “

Bocklemann had no intention to speak in front of more than 500 people in the crowd when he arrived at the jam packed community center an hour earlier. In fact, less than 24 hours earlier he had said he was merely going to the event for the experience.

“I’m mostly going for the experience because this is probably one of the only chances I’ll ever have to do it,” he had said. “Once I graduate I’ll probably move away and who knows where I’ll be and with what job and everything so I kind of figured this is my last chance to experience it.”

The Iowa Caucus is the first caucus in the nation, and is seen by many experts as an indicator of how well presidential candidates will do in the general election.

On Monday evening, thousands of Iowans like Bockelmann met in schools, libraries and community centers to cast their ballots for who they thought should be the next president. At each event one attendee was allowed to speak for three minutes about why others should vote for their favored candidate.

At the end of the night Republican Ted Cruz won the Republican caucus and Democrats Bernie Sanders and Hillary Clinton virtually tied in the polls.

Over the past few months Bockelmann has been one of multiple USD students to take advantage of Political Science League (PSL) trips to campaign rallies in Sioux City led by political science and international studies professor Eric Jepsen.

Jepsen said the group has been able to fill up a 12-passenger van for a total of six trips to Sioux City to see presidential candidates which have included Sen. Ted Cruz, Sen. Marco Rubio, Sen. Bernie Sanders, former Secretary of State Hillary Clinton and businessman Donald Trump.

The students who have gone on these trips have come from all across the political spectrum.

“There’s certainly some independents and folks who have gone to rallies for the opposite side which I think is good and interesting — not because they might be convinced — but just to see democracy in action,” Jepsen said.

Jepsen said the PSL did have trips to rally events during the 2012 election season, but it hasn’t been since the 2008 election cycle that there’s been a wide range of diverse candidates for students to see.

“There’s an opportunity to see the candidates, to see the partisan supporters, (and) to see the staff as they try to collect data and information to try to convince people to either caucus or work toward promoting people to caucus on Monday the first,” he said.

It wasn’t just PSL members who were caucusing Monday night, though.

Katy Bergenske, a 20-year-old junior heath science major, said she was planning on registering to vote on Monday evening when she traveled to Sioux City to caucus for Republican hopeful Ben Carson.

She said she didn’t become interested in politics until a friend told her that she didn’t have a right to complain about the government if she didn’t vote to make her voice heard – something Bergenske called an “eye-opening experience.”

“I just like his (Carson’s) points on a lot of things like the regulations on firearms and he’s pro-life and all of that stuff,” she said.

Iverson said she was planning on caucusing for Donald Trump because she thought he was a “driven candidate” and liked his stance on immigration and veterans’ affairs.

“I’ve been really into politics since I was really young. I always wanted to get involved so this year I’m old enough to attend (the caucus) and I’m going to speak and show my support for Donald Trump,” Iverson said.

While Iverson wanted to speak at the caucus, Bockelmann, who had just switched his voter registration from Independent to Republican minutes before addressing the large contingent of Republicans in Sergeant Bluff, said afterwards he had no intention of speaking at the event.

“I really was the only person willing to (talk) and I figured since I was here I might as well give it a shot,” he said.

When all the votes were tallied at the end of the night, Kasich, who’s only verbal supporter was Bockelmann, had a total of six votes.