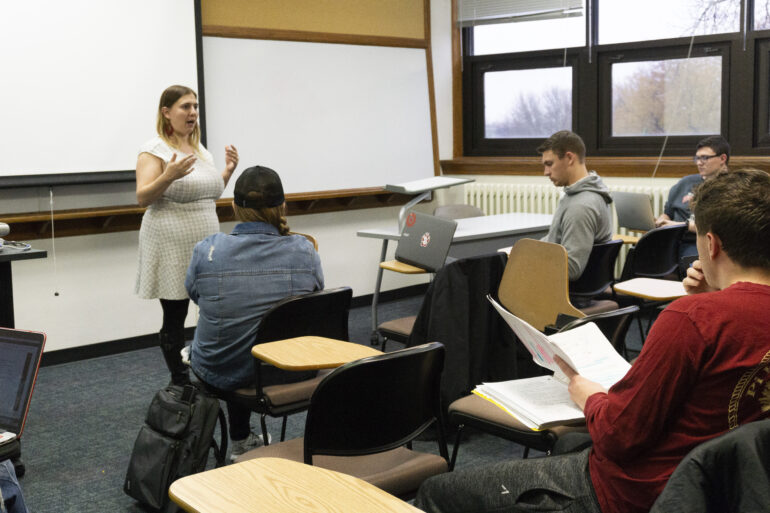 Diversity
Julia Hellwege, a political science professor, teaches classes such as campaigns and democracy but specializes in identity politics. Meghan Mount | The Volante

Hellwege, an assistant professor of political science, can be seen everywhere from the classroom to the Vermillion City Council.

“I wanted to be a professor since I was seven,” she said. “I never really thought about the politics part. I never thought I would run for public office.”

Hellwege identifies as half-Swedish, half-Colombian. She was born in the suburbs of Stockholm, Sweden and lived between Sweden and New Jersey during her formative years before moving to North Carolina with family. She’s moved 40 times in her life and speaks five languages.

She said she was always interested in being a professor, but growing up in two countries pushed her to think more about political science.

“It made me think a lot about…differences between countries and differences in culture,” she said. “Looking back, I always thought about the governmental systems… I think that’s what got me interested in political science, not necessarily politics.”

Hellwege developed an interest in politics in high school when she helped her dad campaign for mayor by making phone calls and canvassing, she said.

“He was the first Hispanic mayor in (Dover, New Jersey) and he actually beat the incumbent,” she said. “At the time I thought it was fun to work on the campaign. All through college and grad school, I didn’t think it really had that much of an impact on me, and now I realize that it probably did. It made me think about public service in a different way.”

Hellwege’s expertise in political science relates to identity politics, which she defines as “how who we are matters in political ways.” She said she got into this specialization because she considers her own identity a lot.

In graduate school, Hellwege’s dissertation focused on minority women state legislators. She said she often pursues questions about intersectionality in her research.

“I was having all these questions about women and minorities and I was looking at the research and at the time there was a lot of research on race and ethnicity and a lot of research on women and I thought this is not really explaining how minority women behave,” she said. “Identity politics are very strong in this country because we have institutionalized identity in many ways.”

Another of Hellwege’s specializations is American politics. She teaches the course Campaigns & Democracy and is considered a faculty expert on the subject.

“Her Super Bowl is the elections,” she said. “It’s been great having her here during this time to provide guidance on the democratic process and campaigning process.”

Diamond-Welch met Hellwege when she came here for her job interview three years ago, and since then they’ve gotten to know each other well.

This is Hellwege’s third year teaching at USD, and she’s served on city council for four months. She said she’s passionate about both of these pursuits. Hellwege said she loves everything about being a professor.

“I love teaching, I love talking to students, I love mentoring students,” she said. “I really like seeing that light bulb go off, getting that critical thinking or seeing them grow over time and how there’s so much development that happens.”

Maria Lewis, a senior political science and criminal justice double major, has Hellwege as an advisor. She said Hellwege pushes each student to be their best self.

“It’s really cool having a woman professor teaching about politics, especially international politics and politics within the United States,” Lewis said. “She’s so educated on it. It’s kind of an empowerment for us girls in the class, especially.”

“I thought a lot about it, and I keep telling my students that women don’t run for office and women don’t have the same kind of ambition, that women are more likely to look at all the other responsibilities and say no I can’t do that,” she said. “I thought if I say no, then I’m not being a really good role model here.”

“She cares deeply and she works very hard in that position,” she said.

“She’s willing to go out of her way to help you learn and wants you to learn so you understand… and are capable of being successful outside of USD,” he said.

Diamond-Welch said she appreciates how Hellwege laughs at all her jokes and is grateful for her positivity.

“(Hellwege sees) the glass, not even half full, it’s like four quarters full,” she said. “She’s just a very positive person, which is rather unusual, so she’s fun to be around.”