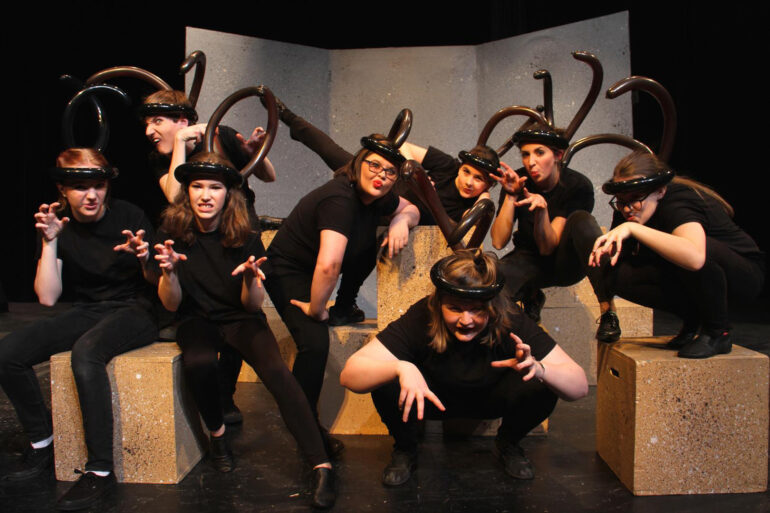 Around Town
The Vermillion High School Drama Club is going to Scotland this summer to perform their play "ANTics" for Edinburgh's Festival Fringe. Submitted Photo | The Volante

Chosen to perform at the Edinburgh Festival Fringe, the Vermillion High School Drama Club is preparing for their 13-day trip to Scotland in August 2019.

“They get recommendations from college and university theater programs and professors who recommended high school drama programs that they think will be good for doing the trip and performing,” Begley said.

“I don’t know who it was, but I got a letter from the American High School Theatre Festival that we’ve been recommended,” she said.

Begley chose to apply for the trip after the recommendation announcement from AHSTF.

“I can either choose to or not choose to apply for the chance to go to Scotland…I did apply for it and we were accepted,” Begley said. “Last summer in August, I was able to go for a week and see how the whole program works and experience the Fringe at that time.”

The drama club will perform an original play written and directed by Begley.

“We are going to be showcasing an original show,” Begley said. “We haven’t gotten it written, I just know the premise and title of it. We will be working more as we get closer to the summer.”

“It’s going to be a movement show, so it will be silent with some music but no speaking, and it will be little vignette about ants and their human-like behavior,” Begley said. “It will be a comic commentary on the society of ants, which is really going to mirror human society and relationship, things like that.”

In order to send students to Scotland, the club has been fundraising. Begley said so far they have raised enough to pay for half of each student’s trip.

“That was our minimum goal, we wanted to be able to at least pay for at least half of everybody’s trip,” she said. “We have some extra money that we are raising, that will help us buy costumes and props and sets, and help us to do some extra things once we get there.”

Begley said this will be an exciting experience for the students.

“It’s very exciting to be able to experience something on that kind of world stage, I mean, they will get to see shows from all over the world, and to be part of that also, and have people come and see their show, it’s just an experience that is once in a lifetime,” Begley said. “It is for me; this is kind of my career highlight.”

Jake Oehler, a junior at Vermillion High School, said he is excited to perform and experience a new culture in Scotland.

“I’m super excited to, first of all, leave the continental mainland, like the whole America…and I am excited to experience something different and to sort of explore a little bit if I get the chance,” Oehler said. “Performing in a festival like that is something that I have never done before, and I am really excited to do that.”

Tessa Dooley, a senior at Vermillion High School, said she is excited to end her high school career with the trip.

“I have been acting my whole high school career, so I am really excited to finish it out with going to Scotland,” Dooley said. “We get to learn other cultures’ way of portraying the art. That’s pretty cool. I also get to meet some of my family that lives there. It’s absolutely exciting.”