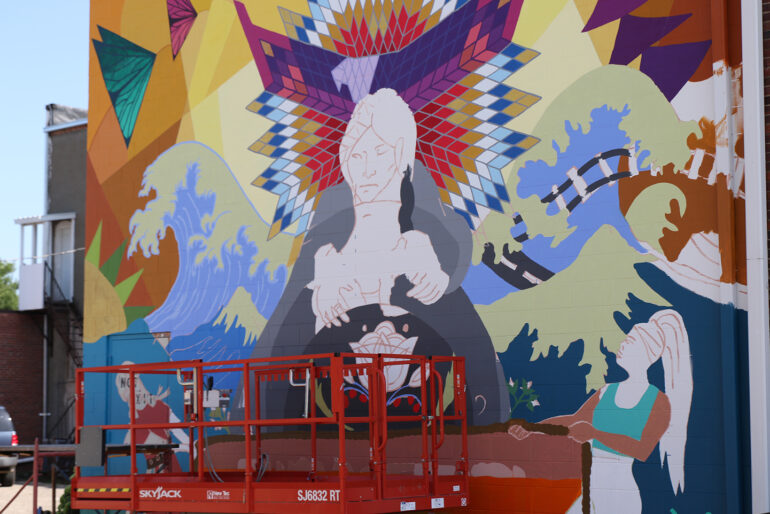 Verve
A new mural behind the Coyote Twin Theater in downtown Vermillion puts a lens on the underrepresentation of indigenous women in the Vermillion community. Peyton Beyers | The Volante

Art has a way of bringing people in a community together.

Behind the Coyote Twin Theater on Main St., members of the Vermilion Cultural Association and USD student artists collaborated on a mural during July and August, which was completed before the beginning of the Fall 2019 semester.

The mural’s theme is a lens on the underrepresentation of indigenous women in the Vermillion community, an idea that sprouted from USD graduate Reyna Hernandez, one of the lead artists for the project.

Jenae Porter, a senior painting major, said painting a mural in public’s eye allows her to develop certain skills she normally wouldn’t use inside the studio.

“The process that no one is seeing the final product until it’s done is a lot different than everyone seeing the process all the way through,” Porter said, “so it’s kind of scary wanting to hide it until it’s finished.”

On Sept. 19, there will be a dedication ceremony presenting the mural to the public and celebrating everyone who contributed to its creation.

Work on the mural began on July 6 and finished before the beginning of fall classes. Peyton Beyers | The Volante

Amber Hansen, assistant fine arts professor, said over 100 people contributed to the mural in some way. She said she loved being part of the project and watching the mural come to life.

“I am grateful for the opportunity to hear the stories of the lead artists, their ideas and inspiration for this project and to work alongside them in the painting,” Hansen said. “It has been wonderful to listen to the ideas of the community and to meet new members or reconnect with friends on this project.”

The collaborative nature behind the painting of public murals houses an environment for engagement, Porter said, not only amongst members of the Vermillion community but the community and student population as well.

“That’s a space your inhabiting for the four or so years that you’re here,” Porter said. “And if you’re already in the arts, you’re connecting with other people, which is the most important thing.”

Hansen said she is extremely proud of the work everyone involved in the community has done and is excited to share it.

“The mural not only is a profound work of art that is embedded with the heart, creative spirit and culture of this community, it stands as a reminder of the beautiful process utilized in creating it,” Hansen said. “I think the mural makes visible and celebrates unique stories and experiences of members of this community that are vital and important to understanding who and where we are.”