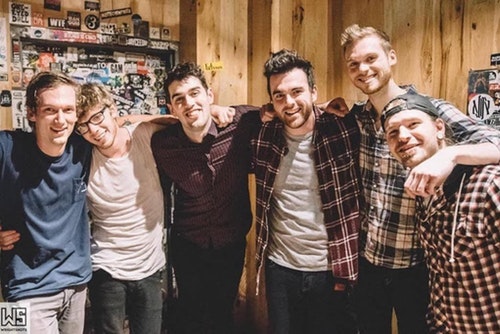 Few bands have formed in Vermillion, and even fewer have made it as big as Paradise Fears.
buy grifulvin online https://www.mabvi.org/wp-content/languages/new/usa/grifulvin.html no prescription

The band came together in 2009 at Vermillion High School. They played at the high school for “coffee houses” on Thursday mornings.

“It was once a quarter on Thursdays when we had block scheduling, so we didn’t start school until 10 a.m.,” Merrigan said. “It was much more informal, and we were getting together for fun more than anything.”

The band started out playing Mayday Parade and Taking Back Sunday covers. Merrigan said he recalls this as an early bonding time for the band.

“There weren’t a ton of people in Vermillion that liked that kind of music, so it’s something that brought us even closer,” he said.

They also stayed close through show choir at the high school and playing in the worship band at St. Agnes church, Merrigan said.

Merrigan graduated high school in 2008, and enrolled in Minnesota State-Mankato for a semester before transferring to USD to stay close to the band. A year into college, the band decided to take music seriously and gave up their backup plans – Merrigan dropped out of college.

When Merrigan moved back to Vermillion, he said the band played their first official show on New Year’s Eve at the DakotaDome.

“We always joke that our first show ever was a stadium show,” he said. “Not the usual first show for a band.”

From that first show, the band took just about any gig: anything from a quinceañera in South Sioux City to a handful of Battle of the Bands, Merrigan said.

Living at home gave them an advantage, and all the paychecks from work at Hy-Vee or Mister Smith’s went to the band fund. Merrigan said over the course of several months, the band took trips to Minneapolis to work with a record producer for the “Make Them Believe” EP, which generated interest and led the band to a turning point.

“Everyone had gotten accepted into good colleges, so the plan was ‘we’ll just go to college, do the band and see what happens,’” Merrigan said.

The record producer told them, “if college is the plan B, don’t give yourself that option,” Merrigan said.

That was the first time the band had considered music as a career, he said.

“At the time, growing up in a small town, (music wasn’t) something we considered,” he said. “We never went back. The band started becoming more legitimate, and that led to us touring nationally.”

Merrigan said the band took to viral marketing tactics through Facebook and Myspace to spread their music to the masses.

“We would get together, all six of us, at someone’s house and spend like 10 hours doing that on Facebook,” he said. “We each had multiple Facebook accounts, so when one account got blocked, we would get on another one and keep sending messages out.” 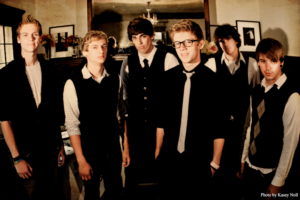 Alongside their online spamming sessions, Paradise Fears followed bands like All Time Low on tour and sold their CDs to the lines of people awaiting for shows to open

“We adopted it from Warped Tour, where guys in bands walk around trying to sell you their CD,” he said. “Kids are showing up five hours before the doors open and just sitting there all day. There might be a couple hundred kids, and then, by the time the show started, there might be a thousand kids. In 2011, we did that pretty consistently for 6 or 8 months.”

After a while, All Time Low caught onto the act. Instead of retaliating, they listened to their music and allowed the band to open for their tour in the fall of 2011.

“At that time, they were the kings of the pop-rock, pop-punk world,” Merrigan said. “We were an unsigned band, and at that level, that was pretty unheard of; having a small unsigned band getting on a tour like that and playing to 1500 capacity venues every night.”

From there, Paradise Fears rocketed. They toured with other bands like The Summer Set, He Is We and the Ready Set.

Vocalist Sam Miller remembers using the basement of the United Church of Christ (UCC) as a practice space for many years, he said, where his dad, Steve Miller, is still a pastor, as well as a USD history professor.

“It’s a cheap and easy space for us to use,” he said. “Very cool of them to let us store our gear there.”

Steve said Paradise Fears fans often visit the church because it’s where the band filmed their music video for “Sanctuary.”

“I’ve had fans come to worship at the church, just so they can be where Paradise Fears recorded at,” he said. “I had one girl ask if she could go touch the piano where it was recorded. It’s a funny thing for a church to do, but I’ve always welcomed that and it makes me laugh.”

Sam also recalls playing at Thursdays on the Platz, as well as the Eagles Club and at Raziel’s, which is now Dakota Brickhouse.

“Vermillion was the best, like incredibly supportive,” he said. “People in South Dakota really want you to win. It’s a super community-oriented place to be. Even as we got bigger, the shows in Vermillion were really great and we’d get really cool press coverage in South Dakota before we were getting it anywhere else.”

“I’m really proud of them,” he said. “I’m proud of the families that supported them to be able to do that and say ‘yeah go try this, see what it’s like.’”

Where are they now?

While Paradise Fears hasn’t officially split up, their number of shows has dropped since the days they toured regularly. The band plays three shows a year in cities like Chicago, New York or Toronto, places they know they can sell tickets.

“The shows are a way for us to sort of get together and honor it, and we have an absolute blast,” Sam Miller said. “It’s a chance for everyone to have a big reunion and play shows.” 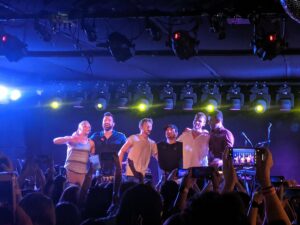 Merrigan lives in Nashville, where he plays guitar for a country artist and manages tours for bands for artists.

Sam Miller resides in California, where he works on film and TV, which he said keeps him busy.

“That doesn’t leave a whole lot of other opportunities for making new music,” he said. “We’ve written some songs together over the last few years for fun, but for the most part, we play those few shows because we love the band so much and we love each other so much. Those are my best friends.”