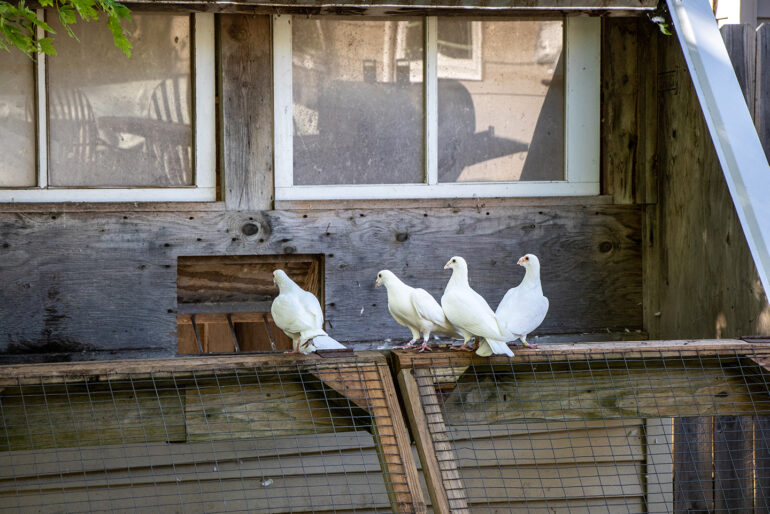 Feature
Four of USD professor Kandy Noles Stevens' 14 homing pigeons outside her home in Marshall, Minnesota. The Stevens began raising pigeons after one of Kandy's children died in a bus crash in 2008. Lauren Soulek | The Volante

There are over 400 species of pigeons in the world, and each species has its own curious trait. For homing pigeons, it’s always knowing the way back from which they came. For a USD professor who raises them, it’s figuring out which way to go.

Kandy Noles Stevens is an adjunct professor and STEM Specialist teaching physical science for elementary in the School of Education at USD. The recipient of the 2019 Graduate Excellence in Teaching at USD, she’s also studying to gain her doctoral degree.

Stevens grew up as the only girl in a crowd of cousins who led her to muddy riverbanks to catch frogs and tadpoles. In high school, despite an upbringing in nature, Stevens had no intention of entering the field of science. Until someone told her she couldn’t.

“My first day of my high school physics class, the teacher said something about how only the boys were going to succeed in the class and none of us girls were going to be able to finish the class,” Stevens said. “I didn’t realize it at the time, but as I got older and was able to look back, it was in that moment that a scientist was born. Because I was going to prove him wrong.”

And prove him wrong she did. She went to work as a chemist for the United States Agriculture Department, and later, became a teacher herself. Now, when Stevens isn’t teaching at USD, she’s teaching at Southwest Minnesota State University in Marshall, Minnesota, where she and her family live.

It’s also the place where, eleven years ago, tragedy struck them. On Feb. 19, 2008 at 3:25 p.m., on a highway north of Cottonwood, Minnesota, roughly 15 miles north of Marshall, a minivan blew through a stop sign and broadsided a school bus returning children home after a school day. The bus flipped on its side, and as a result, injured fourteen people and killed four.

Three of Steven’s four children were on the bus. Two of them survived. One did not.

“Out of that experience, I learned a lot about grief and grieving,” Stevens, whose daughter is now enrolled at SMSU and son at USD, said. “I was asked by a local pastor’s wife if I could share some of the things that the community did well to support my family and in areas that they could improve.”

From that, Stevens added ‘author’ to her list of titles. In “The Red Bird Sings the Song of Hope and Other Stories of Love,” published in 2016, she documents how those around her helped her family through the grief, and offers an idea of what grieving people wish others knew.

Before healing through words, though, she healed through birds — homer pigeons, to be exact.

As her second son endured surgeries from the wreck, he wanted to occupy his time with raising chickens. Because their community had strict laws behind raising farm animals in town, they instead raised pigeons.

“He had been through so much that it seemed like a crazy, whack-a-doodle thing at the time,” Stevens said. “It was a great way to do something productive and to give ourselves something to think about other than all of the negative things we were dealing with.”

The pigeons provided a type of therapy for the family. Her son had a new getaway and Stevens, described as “nurturing” and “a mother figure” by Annaliese Howe, a third-year elementary education major, had new birds to nest and to learn from.

“Learning that life cycle and seeing the flight patterns and just the sound of them coming home, it’s really kind of a neat thing,” Stevens said.

Stevens has spoken nationally about her book and the process of overcoming grief. She’s also morphed the message into her own education by helping schools understand how trauma impacts students and student learning.

“Stay curious,” the mother, professor, scientist, student and pigeon-raiser tells them, “and don’t let anything stand in your way.”

“I think all of the things that I have done in life has been because I’ve been curious about something,” Stevens said. “That really is the hallmark of a true scientist, to be able to just have that natural wonder about the world and to always want to learn more.”