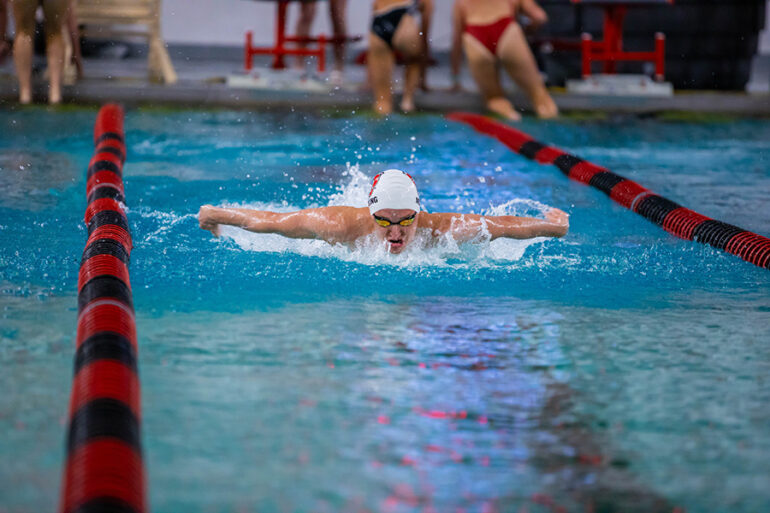 For most, juggling athletics with studying medical biology seems like enough work in itself. Dedicating time to writing and performing music albums in addition can be even more challenging.

Two years ago, Wolner took an official visit with the Coyote swim team and eventually turned it into a college career. Last year, Wolner placed fifth at the Summit League Championships in the 400 IM as a freshman, finishing in 4:04.30. That time is fourth-best in school history for the event.

Since then, he has released an EP titled “Movin’ On” and has a sophomore effort titled “After Hours” in the works.

“I first started playing piano in fourth grade and I really kind of hated the lessons, as most kids do,” Wolner said. “As I played more, I started to love the instrument itself. I’ve been singing my whole life, but the piano brought me to a performance level of music. And then I started playing guitar in sixth grade and that’s when I really fell in love with performing.”

Despite loving the performance aspect of music, Wolner said he never envisioned himself writing music until he started college.

“I always thought it would be pretty cool if I could write music, but I never thought I could actually do it,” Wolner said. “I didn’t know where to start, but the thing is that once you start you get used to it. Your first songs are always really bad; you kind of just throw words on paper. Once you work on it more, it kind of comes to you and you know the right words to use.”

Having school and swim responsibilities, Wolner said he usually works on his music at night after practice and homework.

“After I’m done with all my homework I’ll just be sitting in bed and I’ll grab a guitar and mess around with things,” Wolner said. “It is hard for me to find time but it’s something that I enjoy so much that it gets easy to find time.”

Wolner said the inspiration to put out an EP came from a friend from his hometown of Winona, Minnesota. His friend recently released his own album and had the technology to record and mix and liked the clips Wolner sent to him.

Wolner recorded all six tracks for “Movin’ On” in his friend’s basement, performing all vocals, guitar and piano for the entire EP.

Wolner released his EP through a website called Lander, which allows him to track things like stream numbers for his songs. To date, Wolner said people from 25 different countries have streamed his music.

“I’ll look at the site and see there was a stream in New Zealand today. And it’s like, ‘Oh my gosh, are you kidding me? I don’t know anyone in New Zealand,’” Wolner said. “I’m honestly so blessed with how it’s turned out and I can’t wait to see what the new album looks like.”

His upcoming album, “After Hours,” has a tentative release date of April. Just like “Movin’ On,” it will be available on all streaming platforms. Wolner said he plans to work with sophomore Brigit Blote and freshman Charlie Babcock of the cross-country team as well on this album.

As far as future plans go, Wolner said nothing is set in stone for him.

“At this point, I guess I wouldn’t know what direction to go,” Wolner said. “I’d love to play some shows in Vermillion. I’m a med-bio student, so it’s kind of hard to balance that. But I would love to go into music as well or at least have it be a part of my life. Honestly, I’ve just enjoyed doing it and as long as I enjoy it I’d like to keep at it.”