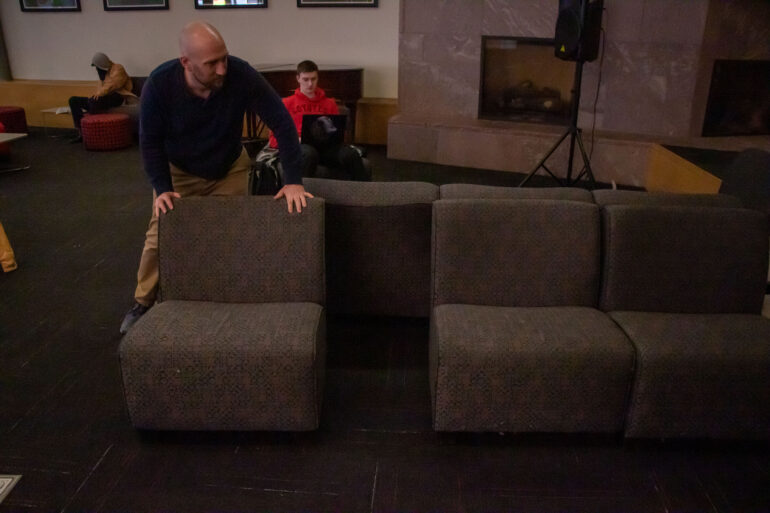 Doug Wagner, the Director of the Muenster University Center and Student Programming, has a hand in every program that occurs in the MUC. He often arrives at work around 8 a.m., but his day typically starts much earlier than that.

He drives to Sioux City at 4:15 in the morning, five days a week, to complete a Crossfit workout.

After his workout, he drives home. He helps his two-year-old son Harrison and 11-month-old daughter, Harper and his wife, Brittany, get ready in the morning. He then gets himself ready and is at the MUC by 8 a.m.

“It’s kind of a crazy schedule and I acknowledge that it’s crazy … and trust me, there are some days even where I don’t want to do (the CrossFit) because it’s nuts and I’m tired, but it just helps me process the day and do my job better,” Wagner said.

When he arrives, he conducts a walkthrough in the MUC, making sure the area is clean. Afterwards, he catches up on emails and begins to plan future programs, makes sure the day’s programs are ready and looks into next week’s festivities.

“A lot of the stuff that I do is really planting crop now to harvest later… It’s doing the work now so that later, things operate and work as they should,” Wagner said.

When it comes to the execution of a program, Wagner said it’s all about what the program is and how long he and his staff have been doing it.

He said each program in the MUC usually involves a half hour of tear down and cleanup, but he doesn’t have to do this alone. He has a variety of MUC workers, which he said he is very thankful for.

“Every student that I work directly with challenged me to be better at my job, which I appreciate,” Wagner said.

Working with college students, Wagner said, makes him forget he’s in his thirties.

“I work with people who are between like 18 and 25-26, so like I always feel younger than I am because I get a lot of energy from working with students,” Wagner said.

One of the college students who Wagner works with is junior communications major and MUC front desk worker Marcus Destin. The two host a podcast together called “Films in Black and White” where they review movies together.

“He moves around very fast. He’ll move furniture. He does a lot of stuff that you don’t see a lot of directors doing in normal jobs, normal positions,” Destin said.

“His heart’s in the right place. I think that’s big for anybody working in this position,” Destin said. “He means well.”

Although his CrossFit training prepares him to handle anything, his job can be equally unpredictable, Wagner said.

“If my job were the same thing everyday, I’d be bored,” Wagner said. “I appreciate that there’s always ways in which that I can make the day fun and creative and a little bit different. I like the challenge it gives me.”

One of Wagner’s goals is to be efficient with the MUC’s finances.

The amount of money MUC programs cost students has decreased from $2.20 to $1.68 per student per program.

“It’s important to me that if I’m going to spend time, energy, effort, and more importantly, student dollars, that it’s as efficient as possible,” Wagner said.

He said enrollment changes, student interests and the occasional unsuccessful program can impact the efficiency of the MUC’s programs.

“But, so long as I’m being efficient with what I do, I’m on board,” Wagner said.

One thing that motivates him is simply doing a good job, he said, regardless of who notices.

“I genuinely want to be the hardest worker, but the quietest talker, like I don’t like to bring a lot of attention to the stuff that I do. I just prefer to do it,” Wagner said.

But that’s not going to stop people from praising Wagner when they see fit.

Myesha “Mimi” Sellers is the secretary of central scheduling for the MUC. She and Wagner have worked together closely for the last few years. One time after an event, Sellers grabbed a microphone and called Wagner the best boss ever. His response, Sellers said, was not enthusiastic.

“Speechless. Shocked,” Sellers said. “He said ‘Thank you,’ then he just kind of walked away and went into his office.”

“He’s a good person, but he’s also a good supervisor,” she said.

One thing she said she admires most about Wagner is he owns up to a mistake if he makes it.

“He doesn’t forget that he’s human and he’s able to really just admit he made a mistake,” Sellers said. “He works on making it better and having a better perspective and moving forward.”

One of the worst mistakes Wagner ever made, he said, was when he mixed up an important date. In the fall of 2015, Wagner booked a group to come to campus, but he gave them the wrong date.

“That was just lack of attention to detail and just not following through and confirming that type of stuff,” Wagner said. “How have I changed? I am never going to let that happen again.”