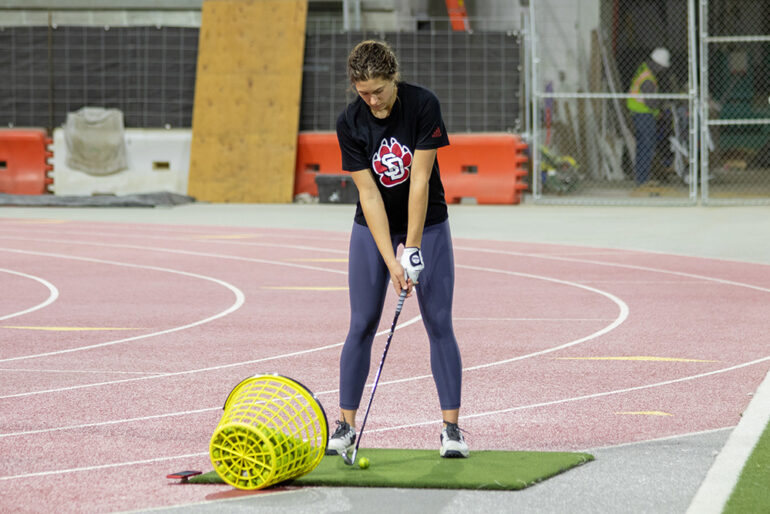 The women’s golf team is preparing for their first match of the spring in Davis, California at the Gunrock Invitational March 2-3.

The Summit League announced in the preseason poll the Coyotes were picked to finish fifth at the conference tournament.

Leading the poll with 64 points is Denver followed by Oral Roberts. Rounding out the top five is South Dakota State and North Dakota State.

Sophomore Emma Sabbagh said the team is training in many different ways.

“In order to prepare ourselves mentally to get back outside and in competition, we read a sports psych book as a team and try and keep our indoor practices competitive and different,” Sabbagh said.

In the fall, the Coyotes were led by Sabbagh and Hall who both shot an average of 77.2 and 77.4. Sabbagh secured a top-five finish while Hall earned a top-ten finish at fall matches.

At the Johnie Imes Invite, Sabbagh saw a season-low 71 during the third round while Hall shot a 72 during the second round.

“Personally, I want to have a more solid, competitive mindset while I am out on the course,” Sabbagh said. “It is easy to play defensive when things don’t go your way, so I want to make sure I am staying focused.”

At the Summit League Championships last season the Coyotes swung their way to a fourth-place finish while Sabbagh tied for 12th with a 21-over-par score.

However, during the winter the Coyotes had limited access to The Bluffs golf course. They split time in the DakotaDome and the annex, an offsite training facility across the interstate.

“During the winter we hit inside in the Dome and do short game practice over at the annex,” Sabbagh said. “We do an hour each day from Monday to Friday, and then we also do a team practice once a week in the evening.”

The golf team also prepares in the off-season by lifting weights.

“Three times a week, we have workouts at 6 a.m two of these are lifts and the third is conditioning. We do this to gain more distance on our shots and improve our endurance on our 36-hole tournament days,” Sabbagh said.

To prepare for the upcoming round of tournaments the women are motivated by their coach, Brett Bennett.

“He makes sure that we understand how much the work we put in now will pay off when we get to the course and we can think, ‘I know how I can hit this shot, I’ve done it a thousand times,’ even if it’s inside,” Sabbagh said.

After the first match in California, the Coyotes will travel to the HBU Husky Invite in Texas, the Kingsmill Intercollegiate in Virginia, followed by a Summit League matchup against Omaha in April.

To close out the season USD will play in the Kansas City Intercollegiate and then the Summit League Tournament in Newton, Kansas April 26-28.