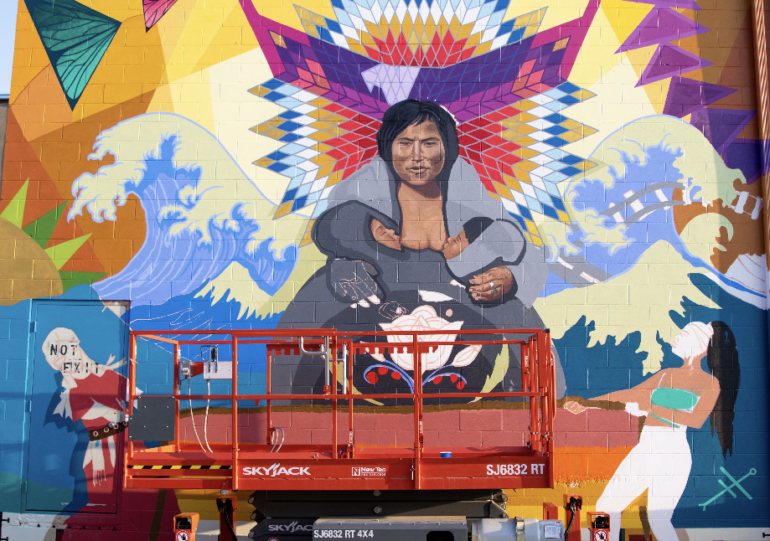 Feature
The final part of the Vermillion Community Mural will be completed this summer. Peyton Beyers | The Volante

Part two of the Vermillion Community Mural Projects’ mural is still on schedule to be finished in the summer of 2020. Despite some setbacks, the mural team still plans to work throughout the summer.

The Vermillion Community Mural Project is a subsidiary part of the Vermillion Cultural Association, created by Amber Hansen, an assistant professor at USD.

The second part of the mural will be finished by the end of the summer, Hansen said.

“We will complete the painting as an image of hope and hopefully (it) is something that inspires and captivates the community,” Hansen said.

In the summer of 2019, the first part of a two part mural, titled “Eúŋkičhetupi” — a Lakota word meaning, ‘we come back to life,’ —was finished. The second part is titled, “Wanáȟča” — a Lakota word for ‘flower that blooms.’

Hernandez said both sections of the mural hold meaning.

“The themes of the mural apply to today in so many ways,” Hernandez said. “The second part is centered around the idea of growth and blossoming.

Hansen said the first section is particularly special given the current state of the world.

The painting will be divided into a top and a bottom portion. Each portion will take around two weeks to paint, Hansen said.

The community paint day which was originally planned is no longer taking place for safety reasons. If it’s safe to gather at the end of the summer there will be a group paint day, Hansen said.

But for now, the current plan is for the artists to solely work on the mural.

“Normally the first day of painting is shared with the community but hopefully as we work, there will be an opportunity for the community to come paint,” Hansen said.

Hansen said they will remain flexible throughout the summer with what’s to come.

“Some of the best art comes out of times of crisis,” Hernandez said. “Artists and creative people play a really important role in any time of crisis. We’re seeing that especially now as people turn to art for entertainment and comfort and courage.”

The role of art in life is now amplified as people look at the world from a different perspective and point of view, Hansen said.

Throughout the summer, the Vermillion Community Mural Project will still be working on connecting the community, while social distancing.

“Art is part of the universal thread that connects us,” Hernandez said. “This indigenous narrative has themes everyone can relate to.”