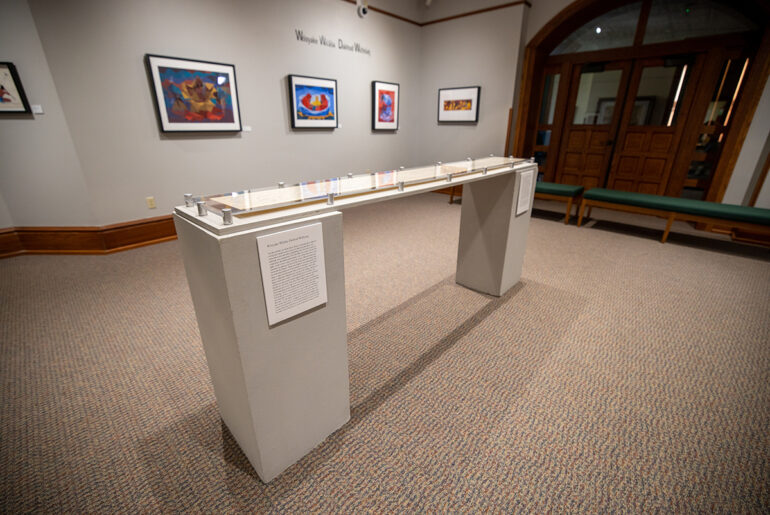 Feature
The Oscar Howe Gallery is located on the second floor of Old Main and is open daily from 1-5 pm.

“(The curators) focus was storytelling as part of the transfer of histories,” Fill said.

Howe, who was a professor of art at USD in 1957, left a lasting impact on USD by instilling opportunities for Native American students according to Fill.

The current exhibit was curated by fellows of the Oscar Howe Curatorial Fellowship, Inkpa Mani and Selena Olvera. The fellowship is a program that provides research opportunities to two USD Native Students per year.

“(Mani and Olvera’s) exhibit surrounds a preparatory drawing that has notes and gridlines showing scale and is thought to be plans for a mural,” Fill said.

The sketch is featured as the central part of the gallery and represents more than just a potential mural said Fill.

“The pencil drawing portrays the continuous cycle of birth, life and death through figurative representations of these life transitions,” Fill said.

To Fill, the gallery is more than the artwork in it as it has an educational impact.

“The Howe Gallery is an educational tool,” Fill said.

Many classes at USD utilize the gallery in their curricula such as creative writing, world religion and drawing classes. Other visitors of the exhibit include community members and Oscar Howe fans.

“We have regular visitors from South Dakota and have had guests who are traveling across the country stop in,” Fill said, “And I often receive calls from Alumni who (come) into town and love to visit and bring friends to the gallery.”

The OHSAI is another aspect of the influences of Howe’s work on Native American culture and tradition. OHSAI is a program open to high school students who demonstrate talent in the visual art and an invested interest in Native American history.

Cory Knedler, chair of the art department, said the institute has transformed throughout the years.

“Although the (original) institute only lasted until 1970, the spirit inspired the current form of the institute, which began in 1991 and has run consistently through today,” Knedler said.

“The intention of the lecture is to promote greater awareness of the importance of the Native American Fine arts from Howe’s generation on,” Fill said.

This year, the lecture is held on Sept. 24 in Sioux Falls at the Northern Plains Tribal Arts Market.

“We are honored to have Keith BraveHeart (Oglala Lakota) as our lecturer this year,” Fill said, “He is an incredible example of the Oscar Howe Legacy as he leads as an artist, educator, director, filmmaker, community leader and change maker.”

To learn more about the gallery and Howe’s impact at USD, go to University Galleries website or visit the Oscar Howe Gallery located on the second floor of Old Main.