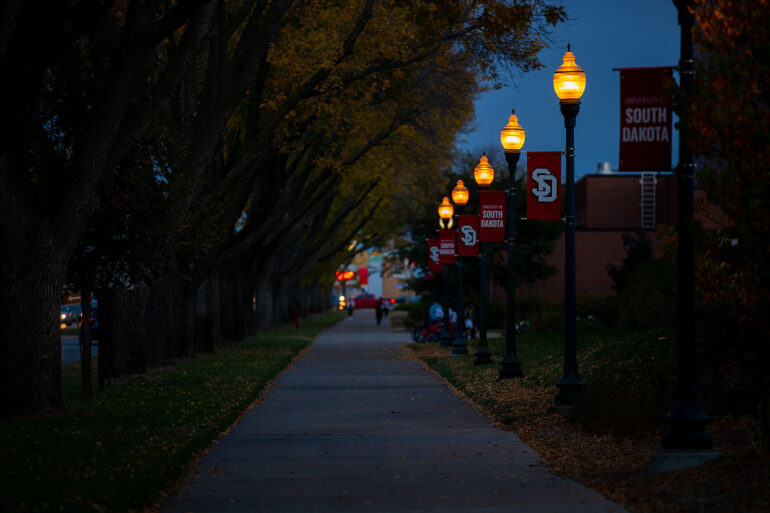 Campus
The safety walk will take place Oct. 21 at 7 p.m. and will begin in front of the Davidson building. Peyton Beyers | The Volante

While on campus, safety is a top priority for students and faculty, as well as for the university itself. To maintain the safety of all, the Student Government Association (SGA) is partnering with the University Police Department (UPD) in holding a campus safety walk to address unsafe areas on campus.

The walk around campus will be on Oct. 21 at 7 p.m. and will begin in front of the Davidson building.

Armand Khan, SGA Senator for the College of Arts and Sciences, said because he closely deals with student affairs, safety is one of his main concerns.

“We hope that during the walk we can talk personally with people and discuss how to improve safety on campus including lighting,” Khan said.

SGA and UPD are encouraging any students and faculty who would like to join to feel welcomed, Khan said.

“We are gladly willing to invite anybody that would help us because the more people, the more we can make sure to cover all areas of the university,” Khan said.

They are currently planning on doing the walk as one group, however if there is a large enough crowd it may be split into multiple groups to ensure proper social distancing.

Bryant Jackson, system director of UPD, said in many areas campus feels quite safe, which is something he said UPD is proud of.

“Despite these areas, it is important to have the USD community collectively address areas that may be too dark or seem unsafe to them,” Jackson said.

Jackson said although UPD should be considered an emergency line, many people would hesitate to call 911 for being scared while walking home.

The university had placed blue light phones on campus to connect with emergency help if someone ever felt unsafe while walking on campus. The phones have now been removed, however, the USD Safe app now has a blue light phone feature.

The USD Safe app, Jackson said, has several safety features resourceful to students, like the mobile blue light phone feature. Other features included on the app are the friend walk and the virtual walk home.

“The friend walk is a feature that shares your current location to a friend and they can watch you walk home, the virtual walk home will also share your location but with a dispatcher and it gives you the option to trigger if you are in danger and need someone sent to your location,” Jackson said.

Although students may be hesitant to contact UPD, Jackson said, they want people to know they are ready to help.

UPD is one of the few departments on campus that is open 24/7.

“COVID or no COVID, holiday or not we will always show up to be there for our students and to protect the pack,” Jackson said.