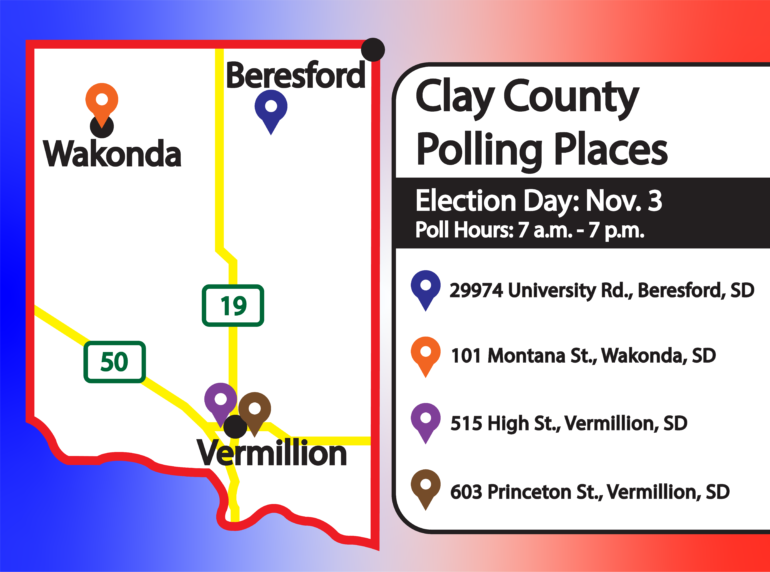 Addison Miller, National Committeeman of Young Democrats of South Dakota and director of the USD student organization Get Out The Yote, said he agrees with both of these points of view in a way.

However, in past elections younger generations have not voted at as high of rates as older generations. In 2016, the U.S. Census Bureau reported 46.1% of 18-29 year-old Americans voted in the 2016 election. This was over 12% lower than any other age group.

Miller said this has resulted in younger generations not getting political candidates to care about the issues Generation Z and millennials care about.

“We have had a lot of registrations in the last two weeks for people who have not registered before,” Crum said. “So there will be a lot of new voters, we just don’t know how many yet.”

Miller said one reason for young people not voting as much could be the feeling their vote doesn’t count. While this might be true for national elections, like the presidency, Miller said, he believes young voters vote counts for state and local elections.

“The election of these state and local candidates will more than likely affect the livelihoods of these college students more than any other candidate on the ballot,” Miller said. “Don’t get me wrong, the president is important and you will see the effects in tariffs and gas prices, but the state, senate and house is literally directly impacting you and your neighbors.”

For voters in Clay County, there are several races on the ballot not for the White House.

In addition, voters in South Dakota will be voting on three different ballot measures.

The third ballot measure, South Dakota Constitutional Amendment B, is a vote on whether to allow sports betting in Deadwood, SD.

“I think there is a lot of misconceptions about mail-in and absentee voting and if I could convey to the voters anything it is that their ballot is secure.” Crum said. “We have a lot of safeguards in place to prevent voter fraud and there are ways for voters to track their ballot.”

Crum said she also believes it is safe for voters to vote in-person despite some people’s concerns about potentially contracting COVID-19 from voting in-person. She said the Clay County election committee has done a detailed job making sure there is no risk for in-person voting.

Some efforts that will be made by polling places include one-way voting lines, poll workers wearing masks and gloves, sanitizing polling stations after every voter and single-use pens.

All polling places in Clay County will be open for in-person voting on Nov. 3 from 7 a.m. to 7 p.m.

Crum said another worry amongst voters was amplified on Oct. 21 when the CIA and FBI held an unplanned press conference reporting Iran and Russia have been actively interfering in the election. The briefing detailed voters in several states receiving intimidating emails from disguised Iranian accounts to vote for a certain candidate.

As of the Oct. 27, none of these emails have been reported by someone from South Dakota.

“(Intimidating emails) are not coming from an official source,” Crum said. “They should probably treat that just as they do any other spam email or phone call. They can report it to us or the authorities.”

“On election day we are not going to know who won and that’s just that,” Miller said. “So after election day let’s just take a second to breath… we’re going to know eventually, so do some other stuff and take your mind off politics a little bit until someone wins.”