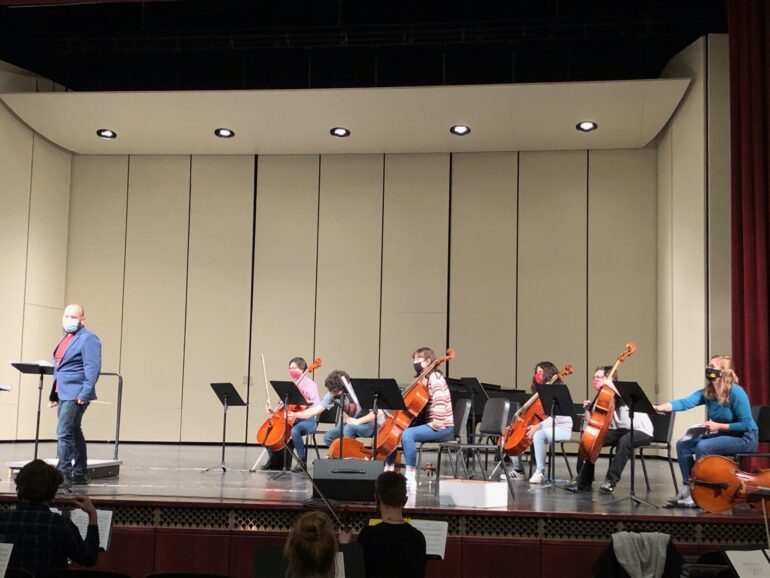 Verve
USD Symphony Orchestra is set to perform on Monday, Nov. 23 for a live-streamed audience at 7 p.m. Alee Anduaga

USD Symphony Orchestra has been doing its part to provide quality performances since the nineteenth century. Even amidst COVID-19 they have faced challenges, adapted and still continue to put on performances for all to enjoy.

The Symphony Orchestra is comprised of mainly university music students. However, it is open to and currently consists of non-music majors, community members and advanced high school students.

Due to COVID-19, the Symphony Orchestra has had to move their practices from a rehearsal room in the fine arts center to their typical performance area, in Aalfs Auditorium.

Luis Víquez, director of orchestras, said moving the classroom to Aalfs auditorium has granted the musicians the opportunity to continue practicing while allowing the space to remain socially distanced.

“I have to be wearing a mask which is really tricky because as a conductor you want to make sure you have facial expressions alongside with the movement of your hands,” Víquez said. “A lot of the time you communicate music through your mouth, smile and facial expressions and that is something that is missing a lot.”

All musicians have to wear a face mask as well and to reduce the risk of spreading COVID-19 the orchestra has limited rehearsals to every other week. Limited rehearsals result in shorter concerts. What would typically be an hour-long concert is now 25-30 minutes for the Symphony Orchestra.

During the concert, Víquez said there will be a few musicians on stage and the rest will be in the front house of the auditorium. They are allowing about 20 people to sit in the balcony of the auditorium to enjoy the show live.

Sierra Kamin, senior criminal justice and psychology major, is in her second year of playing flute for the Symphony Orchestra. Kamin said there has been more positives than negatives to this semester.

“Just being here playing it has really shown that we can still produce music during a time where it was uncertain that we could and out of that experience there have been positives of being able to further develop more technique for my instrument and developing more of a chamber ensemble mentality,” Kamin said.

This semester Víquez said the orchestra has taken a particular approach to perform music written by underrepresented composers. This coming concert will feature a piece written by the female conductor, Deanna Wehrspann.

Deanna Wehrspann, USD staff accompanists, has been playing piano since 2016 for Symphony Orchestra. Wehrspann created a piece that would be uplifting during the uncertain times with COVID.

“The piece that I wrote is called “Quirk” it’s kind of quirky, very rhythmic, kind of funny, there are a couple times when the orchestra has to audibly say ‘hey!’ in the middle of the song,” Wehrspann said.

Being that Wehrspann has played piano for Symphony Orchestra for a while now, she knows a lot of the students and has developed a connection with them and her music.

“It’s very cool for me to see additional things that the conductor and students bring out that sometimes I didn’t even realize were in the piece,” Wehrspann said. “It’s really exciting going to the actual performance and I’m usually sitting there crying because it’s very cool to see actual people doing something with their heart and technique that I thought up in my head.”

On Monday, Nov. 23 the Symphony Orchestra will be performing and having their concert live-streamed, www.usd.edu/livemusic, at 7:00 p.m. for all to join.

Víquez said she encourages anyone who is interested to join the orchestra and that all students, staff and faculty would join in on supporting the Symphony Orchestra by watching the live stream of their concert.