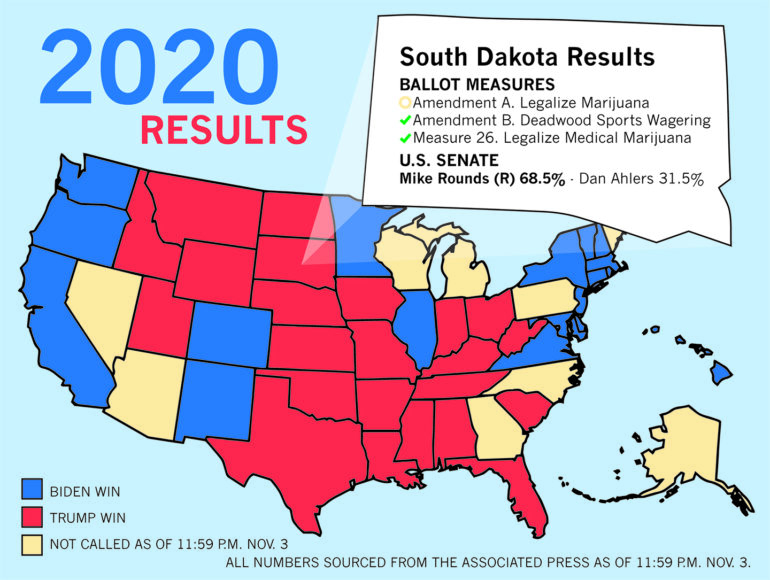 As election results rolled in on Nov. 3, students around campus watched the future of the country become a reality.

Some students chose to attend watch parties on campus while others viewed from the comfort of their homes. But no matter where they watched, students were not surprised by the South Dakota elections.

Wray said she expected the South Dakota senate and house races to reflect the polls.

“I expected the incumbents to retain their seats,” Wray said, “South Dakota will be a red state indefinitely.”

Representative Dusty Johnson and Senator Mike Rounds won their reelection races by large margins, according to The Associated Press.

Along with the reelection races in the state, South Dakota was also faced with two bills regarding marijuana use. Initiated Measure 26 (IM-26) legalizes medicinal marijuana use and Amendment A legalizes recreational use.

“For medical use, I don’t think it is that surprising. I think over the years acceptance of marijuana has grown,” Van Hulzen said.

Brunkhorst also said she thinks it is great that South Dakota legalized medicinal use, as she is from Minnesota, a state where medicinal use is already legal.

As for Amendment A, South Dakota is leaning towards passing the amendment at the time of publication.

“Personally, I see no issue with the recreational use,” Van Hulzen said, “It’s a personal choice.”

“I feel like there is more representation of diversity in South Dakota than in the past, but I still feel that we are lacking compared to other states,” Roberts said.

When it comes to the presidential election, results were not available on Election Night due to an overwhelming amount of absentee and mail-in votes.

“There are a lot of politics behind that issue,” Leichner said, “I think the suspense leads to an interesting election as the whole year has been very interesting.”

South Dakota is strongly leaning towards reelecting President Trump as he leads by 65% according to the Associated Press, but Roberts said she personally saw an increase in liberal voters in South Dakota.

“I saw a lot of activism on social media and more liberal voters in South Dakota,” Roberts said, “I think no matter what it is a great step forward for the state.”

Brunkhorst also said she has seen a shift in overall political opinions during the 2020 election.

“I do think a lot of people have changed their opinions and are getting more educated,” Brunkhorst said.

The final results of the presidential election are expected to be confirmed in the coming days, but Roberts said the suspense makes the election more stressful.

“It is stressful, I know, for fellow college students. The whole election has been stressful,” Roberts said.

With possible riots and violence following the election, Wray said she is nervous to find out results.

“I think it is pretty nerve wracking,” Wray said, “Seeing businesses boarding up their windows and preparing for violence is worrying.”

Overall, the 2020 election produced more voting and engagement than passed elections as the U.S. Election Project predicts a record 150 million votes this election.

Roberts said this increase is a positive change for the nation and the state.

“I see a really positive change happening in the country in regards to voting and I think this election has helped that,” Roberts said.