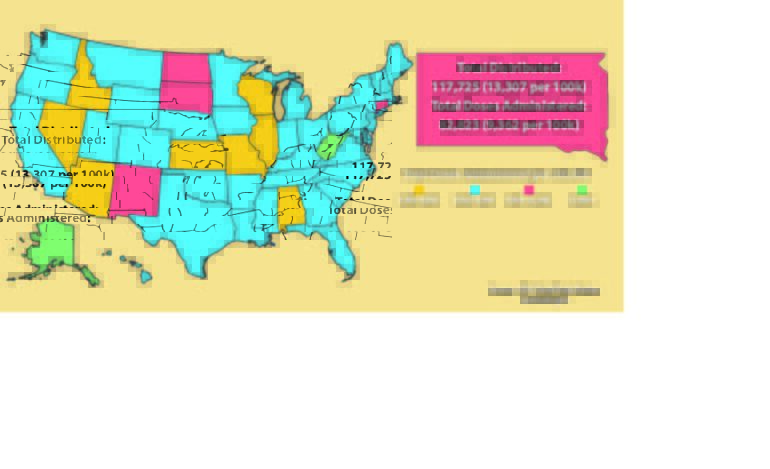 National
The pace of South Dakota's vaccine rollout is among the highest in the US. Rachel Thompson | The Volante

Since the certification of the Moderna and Phizer COVID-19 vaccines in December, there has been a light at the end of the tunnel for this historic pandemic the world is experiencing.

However, some states have been getting closer to the end faster than others. South Dakota is one of these few states as the state ranks at the top of almost all COVID-19 vaccine distribution statistical categories.

South Dakota currently ranks 5th in the nation in vaccine distribution per capita with about 9% of residents having at least one dose of the vaccine administered according to the most recent CDC data. The national average is about 6%.

Rachel Olsen, the clinic director at Sanford Vermillion, said their clinic’s dedication to the process of distributing the vaccine has been critical to their success.

“I can only speak on the behalf of Sanford Vermillion… but I think a lot of it is the willingness of our staff to get the community vaccinated as fast as we can,” Olsen said.

South Dakota has currently administered 75% of the vaccine the federal government has given to the state.

The South Dakota Department of Health (SD DOH) has done this by partnering with the state’s three main health networks (Avera Medical, Sanford Health and Monument Health), dividing up the state and allowing medical facilities to decide how to distribute the vaccine on their own.

In an interview with CBS News, Dr. David Bassel, the head of the vaccine distribution at Avera Medical, said the biggest challenge in the distribution process has been South Dakota’s winter weather.

“Our biggest problem has been the weather,” Bassel said. “One of our first shipments went out into a snowstorm… A truck ended up in a ditch but we got it out on time and no vaccine spoiled.”

Olsen said the biggest hurdle in distributing the vaccine in Clay County has been being diligent with how they use each vial of the vaccine.

“Our biggest (challenge) is just making sure we are using all the vaccine that we recieve,” Olsen said. “It would be great if we could see an increase in allocation for the state of South Dakota, but otherwise it has been such a blessing to to see all these different populations receive the vaccine.”

Currently, Clay County has administered 1,134 doses of one of the two COVID-19 vaccines to 945 people. Olsen said Sanford Vermillion currently receives and administers about 100 doses of the Moderna vaccine per week and is doing their best to make the most of every vial.

Each vial Sanford Vermillion receives has 10-11 doses of the vaccine. Olsen said it depends on the number of doses in each vial.

“We struggle with the amount allocations we have but we vow to never waste a dose and we make sure those allocations are used properly,” Olsen said. “We try to be really strategic about how many vaccine slots we open each day and make sure we have contacted everybody we need to (each day).”

The SD DOH recently announced the state would be moving to the next people in line for Phase 1D, people with two or more underlying medical conditions, by early to late February.

The next in line after this in Phase 1D, according to SD DOH’s plan, would be teachers and other school/college staff. SD DOH are hoping to start administering the vaccine to this group in late February or early March.

Sanford Vermillion contacts each person when it is their time to receive their first or second dose of the vaccine by their preferred from of contant (either letter, phone, or email).

While this mass vaccination campaign is being administered, the COVID-19 pandemic in the U.S. is worse than it has ever been amid new, more contagious variants of the virus. The country is currently experiencing at least 170,000 cases per day since late November and over 3,000 deaths per day for the past two weeks.

South Dakota is less strained by the pandemic compared to the state’s peak in November when the state was consistently seeing over 1,000 cases per day. For the past month, the state hasn’t seen more than 500 cases in one day.