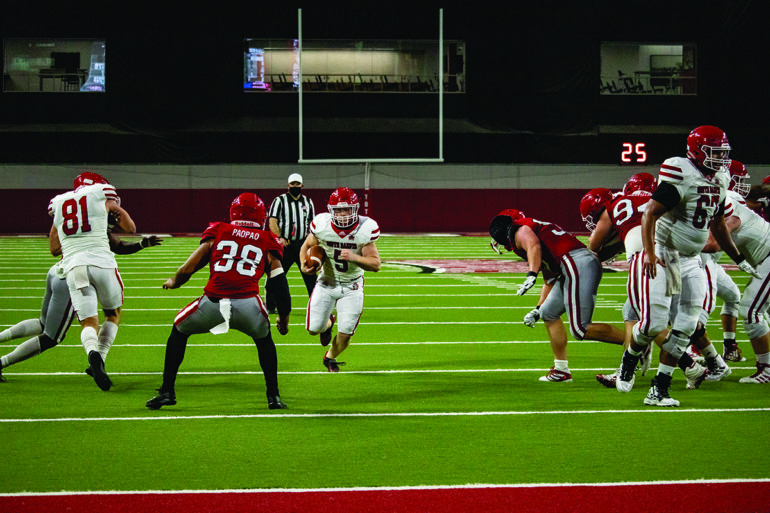 The Coyote defense allowed 32.4 points per game and 460.4 yards per game, which ranked eighth and ninth (out of 10) in the Missouri Valley Football Conference last season. The Coyotes defensive coordinator, Travis Johansen, was in his first season leading the USD defense, and the Coyotes anticipate year two will look much better.

Three of the five Coyote captains are on the defense this season, one player being from each level of the defense. The Coyotes return all four starting linebackers, and both starting safeties. Linebacker Jack Cochrone said he never questioned playing this season.

“I know there’s a lot of things going around with different guys making different decision, but for me with this groups, being around the guys and working with them every day,” Cochrane said. “It would be really hard for me to be around my brother every day and not go out and lay it on the line with them each week.”

Nielson also said the linebacker group is the deepest position on the team.

The Coyote defensive line lost two starters in Kameron Cline and Darin Greenfield, but DeValon Whitcomb said the line has benefitted from going up against the Coyote offensive line in preparation for the season, as well as working individually to adjust to changes up front.

“(We have worked on) different ways that we can attack our blocks up front,” Whitcomb said. “Also we’ve been working on keying in on the fundamentals that we’ve been practicing.”

In the secondary, Elijah Reed and Isaiah McDaniel return as starting safeties. Other players in the secondary have experience, but Reed said that as long as the secondary does their job, the defensive front should be able to get after the opposing quarterback.

The Coyote defense also struggled with injuries last season. A healthy group with many returning starters plan on making the next step defensively. A lot of younger guys have more experience due to the injuries.

Nielson also said there will be a lot of true freshman getting extra playing time since the team doesn’t have to worry about redshirt seasons because of the extra eligibility with COVID-19.

The Coyote defense starts year two under Johansen Feb. 19 against Western Illinois in the DakotaDome at 6 p.m.