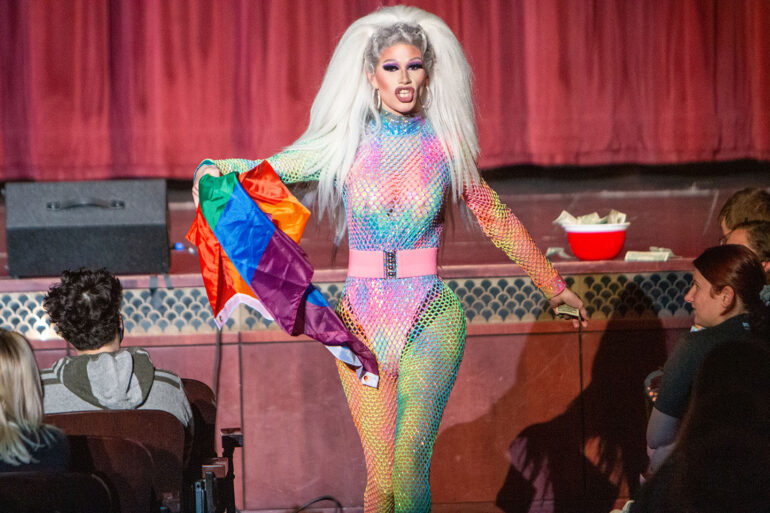 Diversity
The Drag Show hosted by USD's Spectrum: Gender and Sexuality Alliance on April 24 and featured around a dozen drag performers in Aalfs Auditorium. Rachel Thompson | The Volante

USD’s Spectrum: Gender and Sexuality Alliance brought out all the stops for this year’s Pride Week. From April 19- 24, Spectrum hosted a gamut of events at USD such as bingo, movies and the annual Drag Show.

President of Spectrum, Isabel Young, said because of COVID-19, last year’s festivities were canceled, so Spectrum went above and beyond this year.

“Because of COVID-19, last year’s pride week was cancelled, and our yearly trip was postponed, so we decided for this Pride Week to go all out, and we made this year one to remember,” Young said.

Hosted in Aalfs Auditorium April 24, the Drag Show featured about a dozen kings and queens as they performed for students and community members.

“Everyone loves to let go and have a fun time, and a drag show is the epitome of that,” Young said, “The queens and kings put so much work and passion into their performance, and the energy they give off.”

The Drag Show featured lip syncs, dancing and extravagant fashion. The show is held annually and Young said it is an important part of the LGBTQ community at USD.

“Pride Week for me is showing those on and off campus that there is a space where they can be free to live authentically, and that they’re not alone,” Young said.

Andelin Flewelling and Megan Nemmers were in attendance at the show and said it was the first time that they ever had the chance to see drag performers.

“This is the first time we have ever been to a drag show and we were really excited about coming to this new opportunity,” Nemmers said.

Young said South Dakota doesn’t offer many drag shows which is why it is important for Spectrum to host the show on campus.

“For many people in South Dakota, they don’t have a space where they can safely be proud of themselves and they may have never had access to a space or group of people that told them that they were good enough just the way they were,” Young said.

For Young and Spectrum, Pride Week celebrates LGBTQ culture and gives LGBTQ youth a chance to celebrate who they are.

“I really appreciate that this week hands the microphone to LGBT+ people so that they can talk about their own experiences, unlike normal where the mainstream heterosexual-cisgender world gets to dictate our own narratives,” Young said.

As the school comes to an end, Spectrum plans to continue hosting their Pride Week and celebrating LGBTQ+ culture at USD in the coming years.