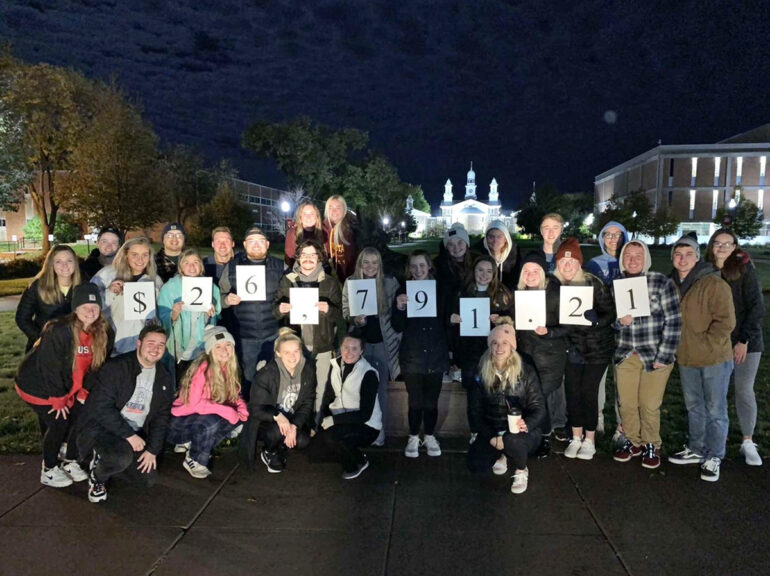 Campus
This year, Dakotathon has been able to raise over $25,000 in one week for the Children Miracle Network.

Dakotathon, a campus organization that raises money for the Children’s Miracle Network and the Sanford Children’s Hospital in Sioux Falls, raised $26,791 last week.

“At midnight on Thursday, we had our reveal and we raised $26,791,” Dakotathon Stewardship Chair Rylan Craig said. “So we reached our goal, it was awesome, great week.”

Dakotathon hosts events throughout the semester to try and raise money, but last week’s push week is more unique time for members to raise money. Thursday’s goal of $15,000 was met with over $16,000 dollars raised on the day.

“Thursday was our big ’15k in a day’ push day,” Dakotathon President Kianna Thelen said. “We had a bunch of different events along with our members trying to raise donations, and we actually ended up raising over $16,000 just on donations alone, not including events we had that day.”

Events on Thursday included a “Pie An Exec,” where a donation would allow you to put a pie in the face of an executive member of Dakotathon, and a Disney Trivia Night in the basement of Varsity Pub.

Dakotathon has other events planned for the semester as well. Every other Thursday is Trivia Night at Varsity. It costs $5 to participate. The other event going on will be a competition with Stateathon, SDSU’s fundraising organization for Children’s Miracle Network, to see who can raise the most money on the day of the USD-SDSU football game.

“Last year, we had a Color Run, which was an awesome idea,” Craig said. “A whole bunch of people across the university ran a 5k and we were throwing colors, and it was an awesome event.”

“We had Blizzards (Friday), that would look so much different because we were trying to stay clean, stay healthy and giving away food, or even pieing each other in the face, that definitely couldn’t happen last year,” Craig said.

For this year’s dance marathon, the Dakotathon team is adding an hour in honor of the 25th anniversary of Dakotathon. The now-25-hour event is still in the planning process, as the event isn’t until later in the spring semester.

“We are going to be getting the kids back here and for them to be available throughout the whole day,” Thelen said. “You’re going to get to learn the Morale Dance like we did years ago, have a bunch of different competitions and prizes to give out, have different entertainers. Basically just a whole day of fun.”

If someone is interested in joining Dakotathon to raise money, Thelen said the easiest way is to text USD to 51555 and one will receive a link to register.

“It’s honestly been an honor to be a part of this organization and to watch the university come together, especially after a really hard year and change lives, it’s been amazing,” Thelen said. “I’m glad that we’re making an impact on campus and other people are noticing.”