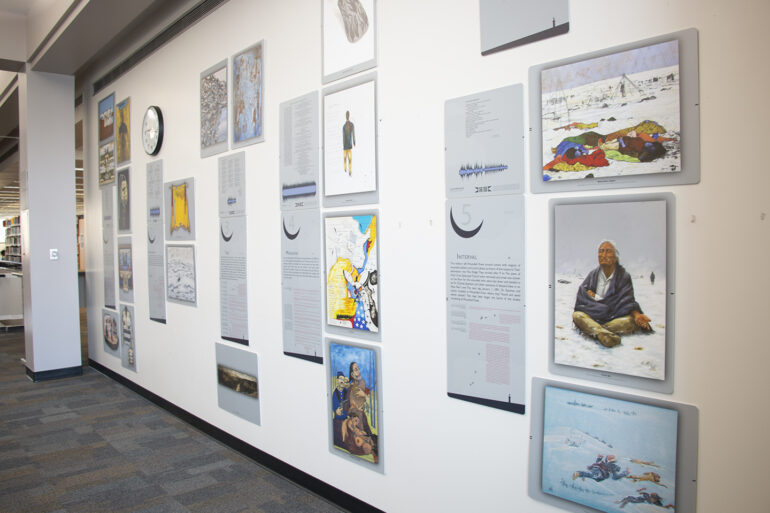 Diversity
The Takuwe exhibit is located on the second floor of the USD library. Bennett Clary | The Volante

On the second floor of the library, the Takuwe art exhibit features several Lakota artists sharing their stories about the 1890 Wounded Knee Massacre.

“It’s broken into seven sections about the series of events that happened in the massacre in 1890 and there is 28 visual artists that put their art in this exhibit, they’re all from Lakota tribes, and there’s also seven poems and seven songs in this exhibit also by Lakota artists,” De Jager-Loftus said.

Dan Daily, the dean of libraries at USD, said the exhibit is to not only display the artwork, but to have a conversation about the historical event that still impacts today’s culture and society. Daily said the Takuwe exhibit fits with USD’s curriculum, especially in the Native Studies Department.

“The Wounded Knee Massacre needs to be in our historical memory, and I think we really need to gain the Native American perspective, not only the contemporary perspective—you know, the 1890s—but also today’s indigenous people’s perspective on that trauma of the massacre,” Daily said.

The Takuwe exhibit was curated by Craig Howe, the founder of the Center for American Indian Research and Native Studies (CAIRNS). De Jager-Loftus said Howe has curated many different topics about the Lakota tribes and this was one of his first exhibits.

“He’s a really great researcher, and he’s done a lot of work about the history and the different things that have gone into this,” De Jager-Loftus said. “He works with some of the educators in the topic and they get together and talk about how they could do exhibits like this. He’s the one that’s really good at getting things you can visualize and putting them together.”

De Jager-Loftus said she works closely with the gallery director in the Fine Arts building, Amy Fill. The two collaborated on putting this exhibit together for the USD community. De Jager-Loftus said they are constantly working to create and find interesting exhibits, and they try to feature students’ artwork when they can.

The Takuwe exhibit will be in the library through Oct. 31 at 12 p.m. and is open to the public.