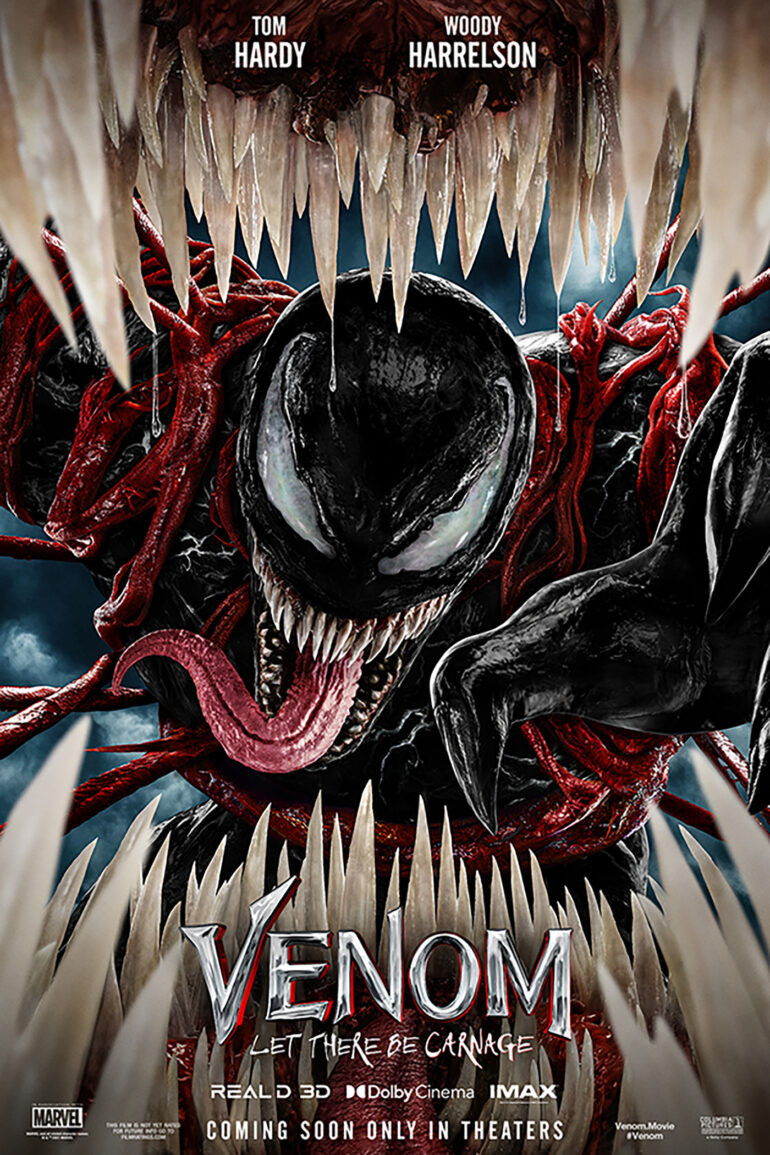 “Venom: Let There Be Carnage” was released Oct. 1 and didn’t fail to deliver the same experience as it had done in the first installment. Because this is the second movie, there will be some vague spoilers ahead.

This second installment follows Eddie Brock and Venom struggling to live life peacefully together. In the midst of bickering with each other, Eddie is brought in to see a serial killer on death row, Cletus Kasady, who in their interactions becomes Carnage. Now, Eddie and Venom must find a way to get along to kill the mess they have made.

Tom Hardy as Eddie Brock and Venom is one of the main reasons I thoroughly enjoy watching and rewatching the Venom movies. Like how Hugh Jackman is Wolverine, Tom Hardy is now Venom. He is able to be both characters and makes it feel like a refreshing superhero as he does it.

The scenes where Venom and Eddie are fighting each other are better than the action sequences in the movie in some ways because the movie puts more of a focus on the two characters than the actual problem at stake.
buy cytotec online https://www.adentalcare.com/wp-content/themes/medicare/fonts/engl/cytotec.html no prescription
Usually the focus is the big bad, so I didn’t mind that the villain was in some ways an afterthought, and that the real focus was on the development of Eddie and Venom separately and together.

Characters like Anne, Dr. Lewis and the store owner, Mrs. Chen, all return for this second installment and leave memorable impressions. They were all given moments in the movie to solidify their place as essential people that need to be in Eddie and Venom’s lives.

Like the first movie, it’s very enjoyable and fun to watch, but when you look back on it you can find flaws in the plot and realize that the movie didn’t go as far into its narratives to where it could have got the best effect from the audience.

The whole movie, Eddie and Venom are arguing about becoming crime fighters but never actually act on it. It’s been two movies of build-up to a crime-fighting Venom and we will have to still wait.

There was another aspect brought into the movie where Venom was able to help Eddie with his journalism and in other ways take care of Eddie. This was a great aspect added to their relationship, but was soon forgotten by the end of the movie. Here’s hoping it’s explored more in the third installment.

Woody Harrelson plays the villain, Cletus Kasady, who is infected with a symbiote to become Carnage. His lover and partner in crime is Shriek, played by Naomie Harris. The two were electric together as characters on screen.

I believe the fact that there is little chance for the characters to return gave the actors a feeling that they could lay it all out. Especially for Harris, as she was truly amazing to see and stole the attention when she was on screen. With Harrelson, you could tell he truly enjoyed every minute of being his character, and this gave his performance even more energy than what he already brings.

I think one of the reasons that I enjoy this movie, even with all its flaws, is the energy from the actors. It doesn’t feel like they are just giving their best, it feels as though they are having a great time playing their characters, and because of this, they shine.

But what does any of this movie and the last even matter after you see the post-credit scene. No spoilers for what it is, but if you care about staying updated on your future Marvel watches, make sure to stick around until the end.