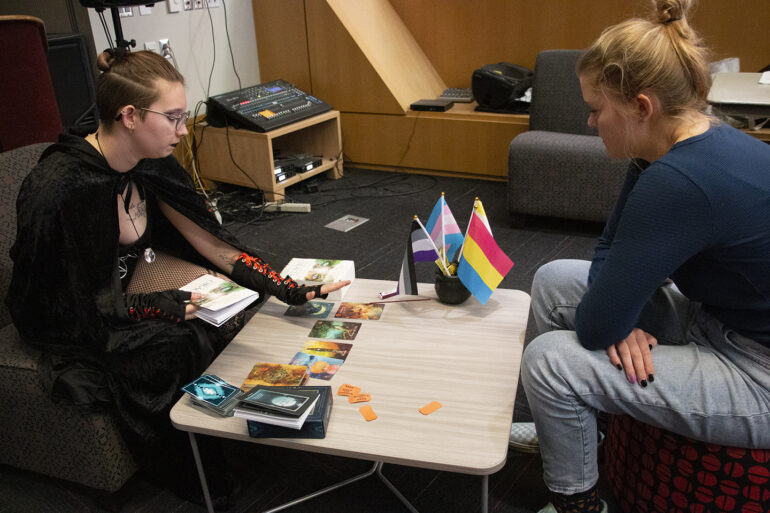 October is LGBT+ history month, and to finish out their month of events, Spectrum and Students for Reproductive Rights (SFRR) held their first ever tarot reading fundraiser Oct. 29. The event raised money for the Vermillion Domestic Violence Safe Options Services.

“So the idea of a tarot night was originally brought up in a SFRR meeting, but I knew there were people in Spectrum that would also be interested in doing this, so I reached out to Lexi (McKee-Hemenway) to collaborate on this,” Young said. “We then discussed who the proceeds should go to, and we decided on Domestic Violence Safe Option Services because access to and resources for safe shelters is important to both of our groups.”

Lexi McKee-Hemenway, the president of SFRR, said members of SFRR asked about doing tarot card readings for Halloween. McKee-Hemenway and Young are both a part of SFRR and Spectrum, and McKee-Hemenway said a collaboration was already on the horizon.

“It was kind of just like, this would make the most sense for our clubs to work together and to collaborate, and we are planning on doing things together in the future. It’s kind of a nice icebreaker for everyone,” McKee-Hemenway said.

Young said the event did not involve any dark magic or devil summoning. She said there are a lot of misunderstandings around what tarot is, but if students approach events like this with an open mind and ask questions, the readers can help people understand the world from their point of view.

“You just have to be open to learning and having fun. If you are asking yourself lots of questions and would like some guidance from the spirits or the stars, then this night is perfect for you,” Young said.

If students were nervous, McKee-Hemenway said, they could bring a friend and an open mind. She said college is the place to learn about oneself and other people’s ideas.

“I recommend everybody to come to events like this. Community members or students, it doesn’t matter who it is, this is supposed to cater for everyone. It’s a very open, safe space,” McKee-Hemenway said.