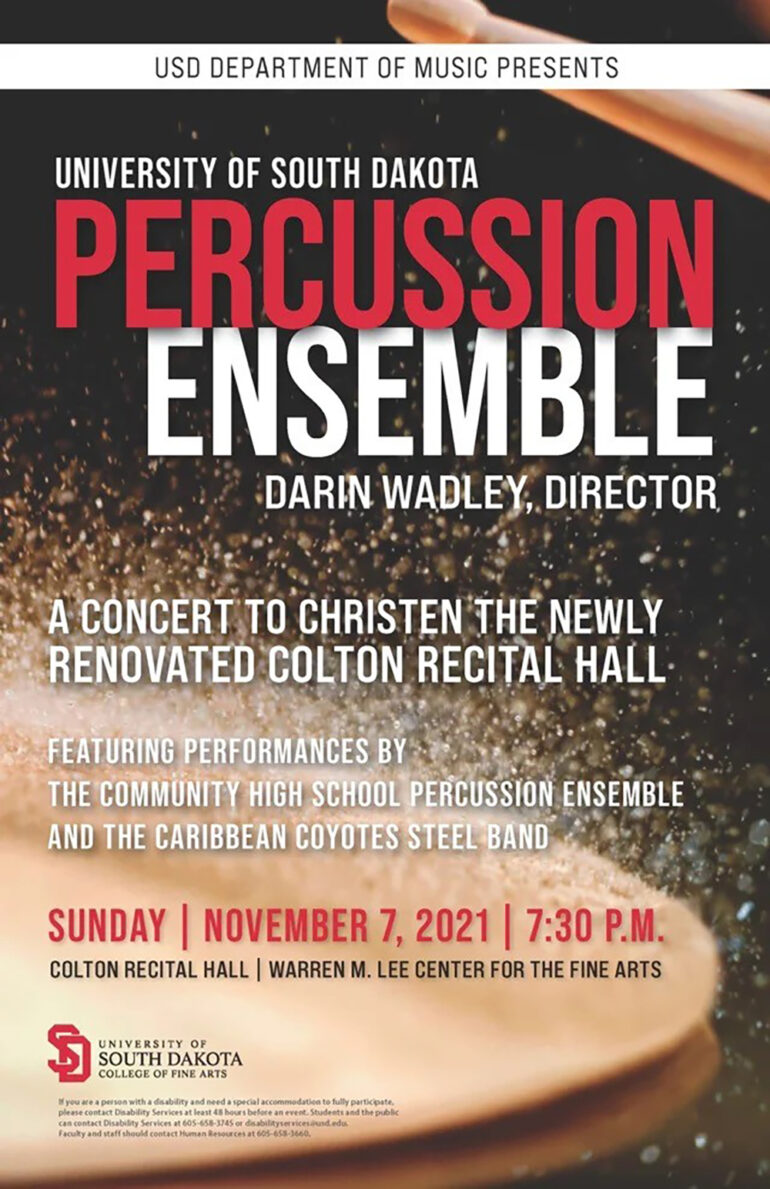 Events
The Percussion Ensemble presented a variety of sounds with a wide range of instruments at their fall concert. Submitted | The Volante

The USD Percussion Ensemble performed their fall concert Nov. 7, christening the newly renovated Colton Recital Hall with the sound of their instruments.

Darin Wadley, director of percussion studies at USD, said the Percussion Ensemble is made up of both music and non-music majors and that the number of players varies each semester, along with which pieces are chosen each semester.

Wadley said the fall Percussion Ensemble concert consisted of snare, bass and tom-tom drums, along with instruments like the marimba, vibraphone, bells and hand drumming.

“The stage is littered with equipment we have where there’s going to be so much stuff on stage, then we’re going to be kind of moving in and out and using different pieces,” Wadley said. “The genre of the Percussion Ensemble is super wide ranging from things like Bach marimba arrangements to really edgy modern pieces for whatever instrumentation we want to use.”

“In high school, they were a little more beginner-type pieces. In college, there’s a lot of different aspects to the pieces that make them stand out,” Barnhill said. “Like in one of the pieces, I learned different ways to play the vibraphone and it made the piece even cooler, so I really enjoy it.”

Barnhill said all of the pieces performed at the percussion ensemble are very unique, none of them are the same, some involve vocals, some are aggressive, some are flowy and some involve very exotic instruments.

“I’m especially excited to play ‘Aurora Borealis.’ It’s kind of mimicking the vibe of the Northern Lights,” Barnhill said. “It really has a nature vibe to it. If you listen to what each instrument plays, it imitates the sounds of nature as if you were walking through the woods.”

Kelly Coslet, a graduate student going into conducting and double bass performance for her master’s degree, is participating in the USD Percussion Ensemble for her first time this semester.

Coslet said she always wanted to join the Percussion Ensemble when she did her undergrad at USD but didn’t realize anyone could join.

“I’ve just been having a really great time getting to know everyone. My biggest surprise is how hard steel drums are to play,” Coslet said. “The actual process of playing it and hitting a note is easy, but where the notes are located is super strange—it’s a lot of muscle memory.”

Coslet said she is excited to be playing on the piece called “Marianne” because it is a piece that is typically learned by ear but is now on photocopied paper, which makes it a challenge to read.

Barnhill encourages students and people in the community to attend performances like the Percussion Ensemble.

“It really gives a different look on what goes on around campus. Most people go to classes and go to their dorms for the rest of the night,” Barnhill said. “It’s really fun to see what other classmates are doing when they’re not in their normal classes.”

The Percussion Ensemble can still be viewed via a recorded livestream on the USD Music website.