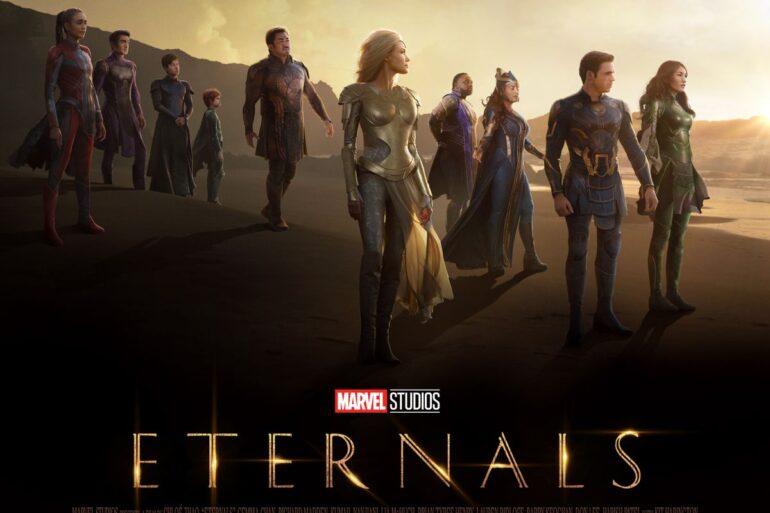 As Marvel continues its Phase Four series, they are expanding their universe fast. It has all been exciting, until now. On Friday, “The Eternals” was finally released to the public and has led to controversy and poor responses.

This Marvel movie is directed by Chloe Zhao who won the academy award for best directing in 2021. Zhao brought together an impressive cast for this movie, but her signature stunning cinematography and talented cast wasn’t enough to make this movie work.

These three characters all have amazing abilities, but are overshadowed by their one-note personalities. Zhao explores many moral dilemmas and different themes through these main three, almost all of them feeling unanswered and wrong.

The idea that these Eternals were here through all the great atrocities of history and did nothing was a big aspect to the movie. Their reason was that they were not supposed to interfere unless deviants were the cause. A few Eternals show their dislike for this rule, but overall still do nothing to help humanity.

This is one of the main reasons the movie struggles. The audience is shown a little bit of care from these characters but ultimately no action. Audiences aren’t used to seeing passive superheroes, especially not in Marvel. Every superhero before had the drive to save the world, but it takes almost half the movie for these heroes to decide if they want to save the world. These passive heroes ultimately made the movie slow-paced and just badly written.

In one area, “The Eternals” does exceptionally well. This movie has great representation for Hollywood and Marvel standards. The cast is diverse in many ways, with main actors being people of color, and one in particular who is LGBTQ. Also, “The Eternals” brought the first Marvel deaf superhero, Makkari, played by Lauren Ridloff, who has the gift of super-speed and was a standout in the movie, and my favorite.
buy lipitor generic https://rxbuywithoutprescriptiononline.com/lipitor.html over the counter

Brian Tyree Henry plays Phastos in “The Eternals” and is the first official gay superhero in the MCU. His representation is exceptional compared to most Hollywood standards, as he has a husband and child rather than a mere reference to his sexuality.

Another thing Zhao added to this movie was a reference to DC comics. Considering this is a Marvel movie and no other Marvel movie has referenced the DC comics, it was confusing. Are they alluding to a crossover or that just the comics are in the MCU? It comes across as if Zhao was allowed to have these DC references because there were little other jokes throughout the movie.

I guess a fun part of this movie is that there were significant scenes that took place in South Dakota, although they just had to choose the flattest and most deserted location.

Response to this movie is hard to put to words because it is hard to grasp what is happening. There are so many actors, storylines, metaphors and more references to DC than the MCU that makes it hard to view it as a whole movie, especially when it just feels like a rushed and misguided mess. Even though the Rotten Tomatoes score is extremely low, this is still an important movie to watch if you are a dedicated Marvel fan.