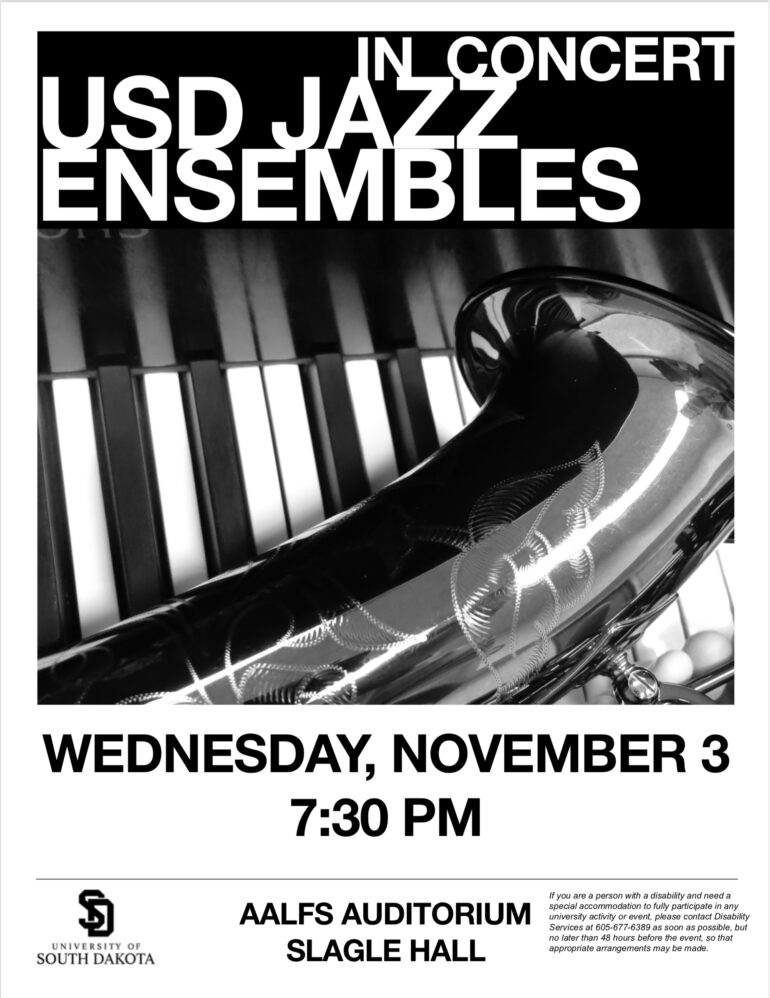 Events
The Jazz Ensemble will be performing a variety of jazz styles including Latin, traditional and modern jazz. Submitted | The Volante

USD Jazz Ensembles I and II will be performing their fall concert Wednesday Nov. 3 in Aalfs Auditorium at 7:30 p.m. The students involved in Jazz Ensemble play a variety of instruments including baritone, trombone, trumpet, piano, bass and drum set.

Kocher said after holding auditions at the beginning of semester, the Jazz Ensemble I began rehearsing for their fall concert.

“Sometimes we like to develop what musicians would call sight reading skills,” Kocher said. “So, there are some days where we would just play music just for the sake of reading through it and getting better at sight reading without really the intent of performing it.”

Junior English major Anna VanHolland plays trumpet in Jazz Ensemble I. VanHolland said the band will be performing a variety of jazz styles including Latin, traditional and modern jazz.

“We have a cool modern piece called ‘Ascending’ that has a lot of stacked chords and different lines and stuff, so that one’s cool, and then we have a pretty, slow ballad piece,” VanHolland said.

Kocher said the band will be covering a lot of bases in terms of style to exemplify how versatile the music of jazz is.

“I think we cover a lot of different moods. Some songs are kind of slower, very laid back, some songs are definitely higher energy, more driving and more powerful,” Kocher said. “I think listeners will really hear a pretty big variety of what jazz can be.”

When deciding the music to play for Jazz Ensemble concerts, Kocher said he tries to pick music that fits the students’ music personalities and encourages student feedback.

“Jazz often features soloists, people that are going to improvise, so I need to pick music that is going to show off different players in the band and their abilities,” Kocher said.

VanHolland said she is most excited for the ‘Two Views’ piece performed by a trumpet and a saxophone player on solo parts.

“It’s a really funky style,” Holland said. “They’re doing a really great job with it and it’s a super fun piece to play and listen to.”

Along with the variety of jazz music being played, Kocher encourages people to watch the performance for the excitement that comes with jazz.

“I think jazz is always exciting because there’s a groove to the music that I think brings a lot of excitement,” Kocher said. “Students are going to be playing improvised solos, and I think that always makes it exciting because every time you play it, it’s a little different, new and exciting.”

Holland said she is looking forward to the fun in having a big audience again and being able to perform live.

“You feel connected with the people and they get to experience it with you while you’re playing which is cool,” Holland said.

The concert will also be available to watch online, livestreamed on the USD music page.