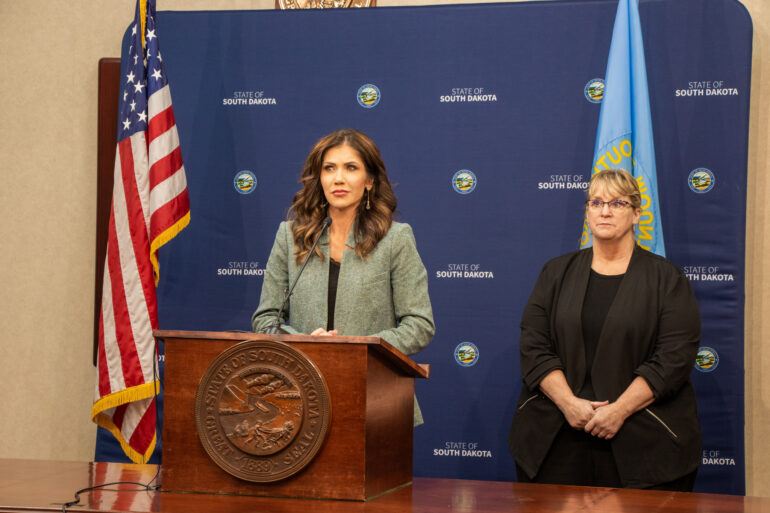 On Jan. 27 the state capitol held press conferences and multiple house and senate sessions to wrap up their third week. Reporters asked multiple questions about similar topics between the Democrats, Republicans and Gov. Kristi Noem.

Democrat Sens., Troy Heinert and Jamie Smith, discussed Senate Bill 46 which would not allow transgender women to compete in women’s sports because of their biological sex or the sex written on their birth certificate.

Heinert said the bill is “another hurdle, another barrier” for transgender women to play in their sports.

“They are stirring up fear that all these boys want to play in girls sports. It’s not the reality. It’s not true,” Heinert said.

Republican House Majority Leader, Kent Peterson, said SB 46 has appeared in different forms before the legislature in the past. Peterson said this is an opportunity for the legislature to take it on and move onto other issues that are of more importance to the people of South Dakota.

After discussions over SB 46, the Republican senators discussed how the new Opportunity Centers on all public South Dakota campuses would be a positive change for students.

Peterson said they would need to continue listening and that the Board of Regents currently has the opportunity to do so, Sen. Gary Cammack agreed.

“I believe that the opportunity centers provide for a more diverse discussion and inclusion in many areas,” Cammack said.

Gov. Noem said the Opportunity Centers were created to recognize that everyone is equal and everyone should have the opportunity to be successful. She said the diversity offices were renamed and refocused on a mission that creates opportunities for all students that choose higher education in South Dakota.

“It’s not dismantling them, it’s broadening their missions so that they focus on every single student. Diversity is a fantastic thing,” Noem said. “I have incredible diversity in my life, in my family, in my friends and circles of influence…but this is about focusing on the fact that every single person has value and has the opportunity to be successful at our university campuses.”