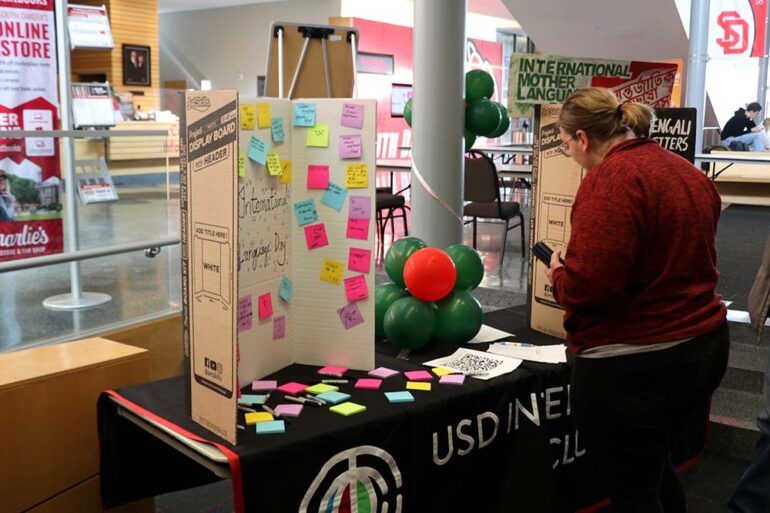 The International Club hosted an event in the MUC in celebration of International Mother Language Day to not only teach students about the holiday but also to promote it as well.

The idea to celebrate International Mother Language day also known as Matribhasha Diwas was an initiative by Bangladesh and was promoted by the United Nations Educational, Scientific and Cultural Organization (UNESCO)  general conference in Paris on Nov. 17, 1999 and was declared an international holiday to be celebrated every year on Feb. 21 according to the United Nations’ organization.

The international holiday is celebrated by promoting the awareness of multilingualism and the diversity of cultures and linguistics as well as celebrating the preservation and protection of languages used by people around the world. The United Nations as well as UNESCO have multilingual and multicultural societies that exist throughout the languages that transmit and help preserve the traditional knowledge and cultures in a sustainable way according to UNESCO.

International Mother Language Day also recognizes that languages and multilingualism can advance inclusion as well as the sustainable development goal focused on leaving no one behind.

Mantasir Mamun, the president of the International Club, said the club is always looking for something that shows diversity and is able to teach something new about another country’s culture and international diversity.

“So basically our main goal and focus is to know everybody and about every country’s language and how they talk and the history of International Mother Language Day. So, this kind of general knowledge and some diversity (is something) we want to introduce to everyone at USD,” Mamun said.

Many countries celebrate International Mother Language Day differently. For instance, Bangladeshis celebrate the holiday by placing flowers at the Martyrs’ Monument, which is the national monument of Bangladesh set up in memory of those who have passed away in the Bangladesh War of Independence and its replicas according to National Today.

In the United Kingdom, they built a replica of Dhaka’s Shaheed Minar, a national monument in Dhaka, Bangladesh, which establishes and commemorates those killed during the Bengali Language movement in London, where members of the community can go to lay wreaths and sing songs. The United States celebrates the international holiday with the Mother Tongue Film Festival in Washington, D.C according to London Remembers.

Mamun said they plan on having two presenters from the language department as well as a guest speaker from Bangladesh to discuss the holiday.

“The international holiday originated from Bangladesh and they will present the history of the holiday because the story came from Bangladesh so that’s why we will have someone from there talk,” Mamun said.

The International Mother Language Day event will also include food, decorations and quizzes on languages and the history of the holiday with prizes students could win along the way.

The International club has two events planned after the Mother Language Day event which are the Festival of Nations which will be on April 10 and the Kites Festival which will be April 20.