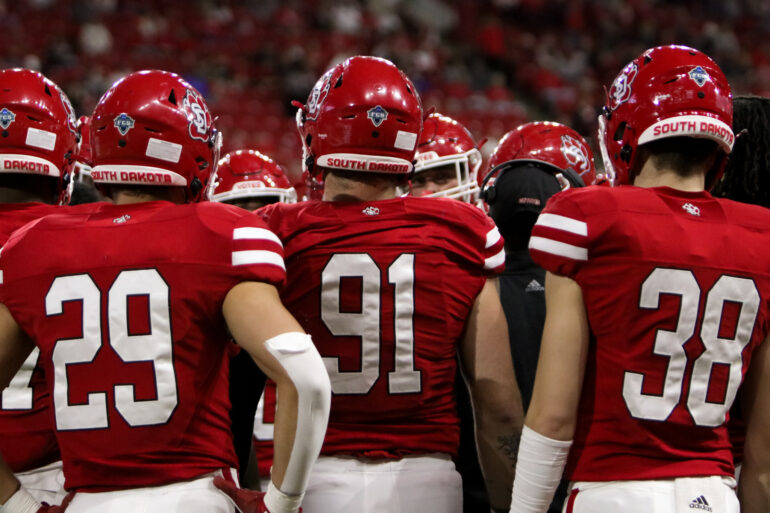 The 2022 fall season of sports has ended which means the volleyball and football teams are heading into the offseason.

Football Moments Throughout the Season

The football team finished their season 3-8 after starting the season with the toughest schedule in the FCS.

In their first home game of the season, they hosted the Cal Poly Mustangs on Sept. 17. The Coyote offense scored 21 points in the first quarter, all by sophomore quarterback Carson Camp  with two throwing touchdowns and one rushing. South Dakota came out on top 38-21 to capture their first win of the season.

In USD’s seventh game, the Coyotes returned home for a Dakota Days matchup against No. 14 Southern Illinois. The Salukis scored on the opening drive to take a 7-0 lead over the Coyotes. The Salukis’ score went up 21-7 in the early minutes of the game.

In the last drive of the first half, Nielson benched Camp for redshirt freshman Aidan Bouman. Bouman then led the Coyotes in a comeback victory over Southern Illinois 27-24, maintaining Nielson’s perfect winning record on D-Days.

South Dakota’s second to last home game was against Missouri State. South Dakota outscored the Bears 20-3 in the first three quarters. Missouri State however, scored 10 straight points to bring the score to 20-13.

The Bears, on their final drive of the game, turned the ball over on downs, giving the Coyotes their third and final win of the season.

At the end of the 3-8 season, USD’s athletic director David Herbster announced that the university will be extending Nielson’s contract.

Godfrey also accepted an invitation to the NFLPA Collegiate Bowl which will be held on Jan. 28, this is the same event that former Coyote and current Kansas City Chiefs player Jack Cochrane took part in last year.

Godfrey and Jensen were also named to the Missouri Valley All-Academic Team. Camp and Mogensen were named as honorable mentions.

Since the final season game, a few Coyotes have entered the transfer portal including Camp, Lawrence and Eliodor.

With their 27-3, regular season record, the Coyotes entered the Summit League tournament as the No. 1 seed and captured a first round bye.

In the second round, USD played No. 4 Denver and defeated the Pioneers in three sets to move onto the championship round against the No. 2 Omaha Mavericks.

In the championship round, the Coyotes won in three sets and secured their third straight Summit League Championship and ticket to the NCAA tournament.

In the NCAA tournament, South Dakota got selected in the Omaha region to play the No. 23 Houston Cougars.

The Cougars won the first two sets 25-14 and 25-19. USD bounced back to win the next two 25-18 and 25-23. These two set wins for the Coyotes were the first set wins in the NCAA Tournament in program history since joining the D-1 level.

Williamson will be losing two seniors for her 2023 season in Weideman and Aimee Adams.