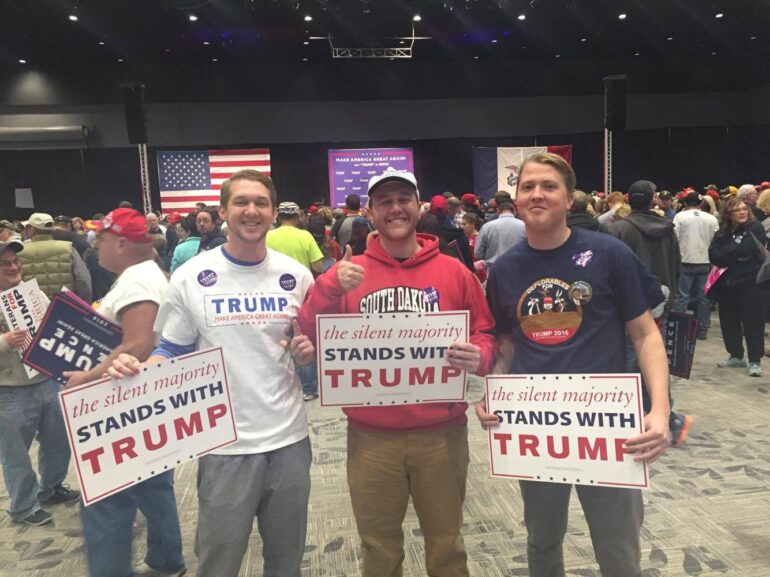 National
USD College Republicans President Kade Lambert, middle, poses for a photo with friends at a Donald Trump rally in Sioux City, Iowa Nov. 6. Trump made a speech to more than 3,500 people at the Sioux City Convention Center two days before the election. Submitted photo / The Volante

“His rallies are just very famous, I would say — a lot of high-energy people here. It’s a very interesting atmosphere to say the least,” said Kade Lamberty, the president of the USD College Republicans. “It’s fun, especially if you support Trump and yeah, it’s a good time.” 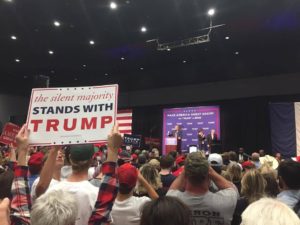 Lamberty, who was initially a Rand Paul supporter until after the first debate, said he’ll be voting for Trump on Tuesday. Lamberty said he believes Trump has tapped into an anger that everyday people have against politicians.

“I think there’s a lot of people upset with the system and he’s kind of just the human hand grenade that you can kind of throw at the system,” he said. “People are sick and tired of kind of Washington elites and Washington insiders controlling our government, so he’s kind of the ultimate outsider and that’s pretty much why I support him.”

During his more than 40 minute-long speech, Trump railed against the “dishonest media” and told attendees that his opponent, Democrat and former Secretary of State Hillary Clinton, couldn’t be trusted. He also vowed to build a wall on the Mexican border and bring “law and order” to the United States.

“The media and the political elite don’t know the pain and the suffering these people are living under, but I figured it out a long time ago and that’s why I’m here and I’m with you. I was on the other side,” Trump said.

Trump ended his speech in Iowa vowing to make the country more prosperous.

Tyler Reck, a senior criminal justice major who attended the rally, said he early voted for Trump and has supported him since he announced his candidacy. This was the second Trump rally he’s attended. 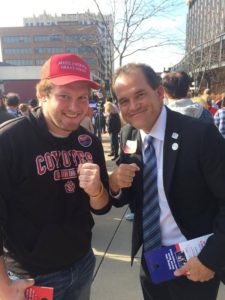 Reck said he predicts the race will be close.

“I think it’s going to be a lot closer race than people think its going to be. Last month it was 52-39ish, now it’s 46-45 percent so it’s getting closer and with the email scandal thing coming out I think that’s what made it closer.”

Last month, FBI Director James Comey wrote a letter to Congress saying the agency was again looking into whether a new batch of emails discovered in an investigation might contain classified information related to the former Secretary of State and a private email server that she kept.

In a letter to congressional lawmakers Sunday, Comey said the FBI has worked “around the clock to process and review a large number of emails” obtained from a device belonging to Anthony Weiner, the disgraced former congressman and estranged husband of top Clinton aide Huma Abedin.

Comey said the review has not changed the bureau’s assessment from earlier this year that Clinton should not be prosecuted for her handling of classified information at the State Department.

Clinton was infuriated by Comey’s decision to alert Congress late last month that the FBI was reviewing new materials, calling it “unprecedented” and “deeply troubling.” The decision shattered what had appeared to be Clinton’s solid grip on the race and emboldened Republican Donald Trump.

Trump landed in Minnesota for a rally moments after Comey’s announcement. He made no direct mention of the FBI decision and continued to insist —without evidence — that Clinton would be under investigation during her potential presidency.

“She’s protected by a rigged system,” he said. “She shouldn’t even be allowed to run for president.”

The Associated Press contributed to this story