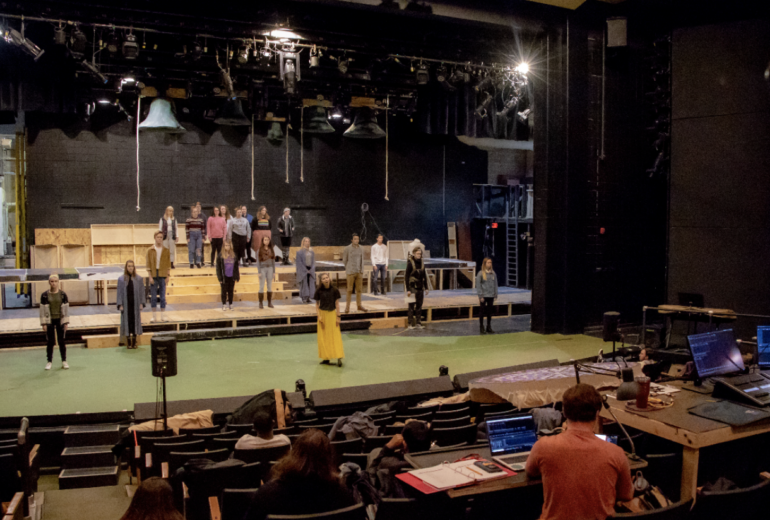 Events
The USD Theater Department will be performing "The Hunchback of Notre Dame" Nov. 22-24 and Dec. 5-8 at the Wayne S. Knutson Theater. Lauren Soulek | The Volante

From Disney to the Wayne S. Knutson Theater stage, “The Hunchback of Notre Dame” is coming to life as the largest USD Theatre Department production since 2013.

With a crew of over 60 people, Raimondo Genna, the director and chair of the USD Theatre Department, said the school hasn’t seen this size of cast since their production of “Les Miserables” six years ago.

Assembling this large of a production is good learning experience for the students Genna said.

The Hunchback of Notre Dame, based on Victor Hugo’s 1831 novel, primarily tells the story of Quasimodo, the bell-ringer of Notre Dame, as he tries to find acceptance within society.

“The show … talks about how even though someone can be seen as ugly or vicious, you can still find beauty in anyone really,” first-year student Marquise Howard said.

Howard is taking on the role of a classic “Hunchback” character Clopin Trouillefou, who Howard said is very carefree.

“He doesn’t really follow the rules, but at the same time he still cares for his people and cares about others,” Howard said. “He just has a lot of fun all the time.”

Preview: USD Theatre Department’s The Hunchback of Notre Dame from The Volante on Vimeo.

The musical also includes Romani characters, like Esmerelda and Clopin, and depicts the struggles of people in Paris during the 1500s. Genna said the cast and crew have worked to avoid possible stereotypes associated with the Roma people.

“We went out of our way to make sure we were not falling into bad stereotypes and trying to represent them properly and tell a really good story about how we make people feel like outsiders within a society,” Genna said.

Campus can watch a story of love and acceptance unfold on Nov. 22-24 and Dec. 5-8 at Wayne S. Knutson Theater in the Fine Arts building.

Howard said he encourages students to see the show.

“I’m looking forward to having other people get to see it,” Howard said. “See how beautiful the show is and how much work we’ve actually put into the show.”

Genna said he’s excited for the students to be able to show off their talents with this production.

“I’m excited to see people come and watch the show and see just how wonderfully talented our students are,” Genna said.